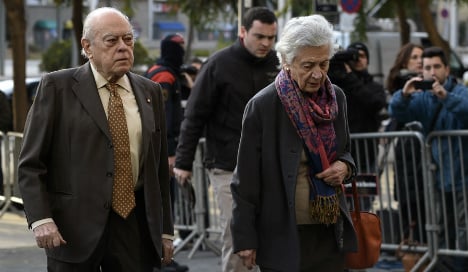 Judge Jose de la Mata ordered Pujol, who governed the wealthy northeastern region of Catalonia from 1980 to 2003, and his wife Mercedes Ferrusola to appear before the National Court in Madrid on February 10th a Spanish judge announced on Wednesday.

The judge assumed jurisdiction in the case that was originally opened by a court in Barcelona against the couple and three of their children after the former Catalan leader in 2014 admitted publicly that had hidden a considerable amount of money in Andorra for decades.

He said there are “signs that members of the Pujol family have for years orchestrated and coordinated a joint strategy to develop various economic businesses, generate revenues, and hide and distribute them amongst themselves according to established criteria to launder the assets”.

Pujol became a figurehead for Catalan nationalism during his time in office as he secured more funding for the region in return for the parliamentary support of successive minority national governments in Madrid on left and right.

But he stunned supporters and suffered a loss in prestige when he announced in July 2014 in a letter that his family had hidden an inheritance from his father in an offshore account in Andorra, a small principality located in the Pyrenees mountains bordered by Spain and France.

He said in the letter that the money belonged to his father who earned it on the currency black market during the dictatorship of General Francisco Franco and who left the fortune to his grandchildren.

Pujol has denied accusations from opposition political parties that the money actually came from corrupt activities during his 23-year stint as head of the regional government of Catalonia.

In a more than 200-page writ, the judge said accounts belonging to Pujol Ferrusola and his ex-wife reflect deposits “that cannot be associated with a legal activity”.

The accounts also showed transfers made by businessmen who are connected to the public sector in Catalonia.