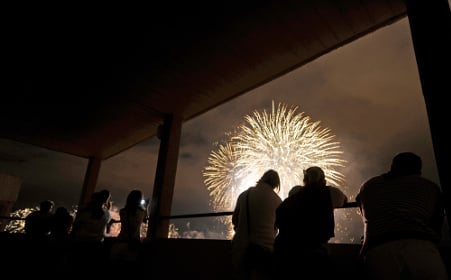 If you want to celebrate New Year’s Eve in Spain your best bet is to go to one of the bigger cities where you’ll likely be surrounded by like-minded revellers. And if you're keen on doing New Year's Eve the Spanish way, enjoy a nice meal with friends or family before heading out into the night to ring in the new year.

Some people also believe it is good luck to wear red underwear on New Year's Eve so make sure you're all set before heading to some of the best places in Spain to celebrate New Year's Eve: The very heart of the Spanish capital celebrates New Year’s Eve to the max. It is also home to the famous clock tower which dictates the pace of festive grape-eating – one at each stroke of midnight.

New Year's Eve celebrations from Sol have been broadcast live on Spanish television since 1962 so why not join the thousands who gather in front of the town hall to bring in the new year, grapes and cava in hand?

Just make sure you've arranged transport home, as the Puerta del Sol metro station will be closed from 9pm as security is beefed up around New Year preparations.

With sunny weather and temperatures of 15C forecast for New Year’s Eve in Santa Cruz, one option is to escape the chilly weather of mainland Spain and head to the Canary Islands for a balmy New Year's Eve. And if all that sun gets is too much to deal with, you can always take a trip up amazing Mount Teide for a dose of snow the next day.

Celebrate Cap d’Any (New Year’s Eve in Catalan) by visiting the Magic Fountain of Montjuic’s New Year’s Eve countdown, which includes a fire, water and light show and music celebrating the past 50 years.

After the clock strikes 12, you can party the night away in some of Barcelona’s best clubs including Razzmatazz, spread over five rooms. With all kinds of music, the club it's perfect if you're heading out in a big group of people with diverse musical tastes. Tickets are on the expensive side but include a souvenir T-shirt, a glass of champagne and two other drinks, and not forgetting those lucky grapes. Head to Placa Cort, near Palma Town Hall where from 11pm on 31st December there will be a free New Year’s Eve party, including DJs, light shows and dancers.

Granada’s Town Hall organizes a big party every New Year’s Eve on Plaza del Carmen with live music and fireworks. This year more than 3,000 party bags, known as ‘cotillónes’ will be distributed from 10.30pm, each containing 12 grapes, party hats and horns.

In fact, it's a great time to visit Granada because New Year's Day is followed by another regional bank holiday, the Toma (Seizing) of Granada, which features a one-hour service at the Town Hall and a military march across the central square. If you’re planning on hitting the slopes this New Year’s Eve, head to the Formigal ski resort in the Spanish Pyrenees, which will be holding its annual New Year’s Eve party. Events kick off at noon and continue into the night, with DJs, dancing, fireworks and celebrations with an international flavour.

If you want to welcome in 2016 in a different style, head to Pamplona, where a recent but popular tradition is celebrating Carnival in advance by donning disguises on December 31st. Residents dress up as all kinds of characters in the old town, giving the streets a fantastic atmosphere.

It is not unusual to stroll past astronauts, fairies, witches or even current celebrities and animals on New Year’s Eve in Pamplona, so you can be whoever you want to be to welcome in the new year.

If you're sick of spending the new year in a crowded, overpriced bar – or you just need an excuse to justify a big night out on the town – why not put on your running gear and join the 25,000 people taking part in La Coruña's San Silvestre Rialto 7.7 kilometre (4.8 mile) fun run.

The La Coruña event is actually one of around 200 such 'San Silvestre' runs in Spain with other big runs taking place in Madrid (San Silvestre Vallecana) and Barcelona (Cursa del Nassos).