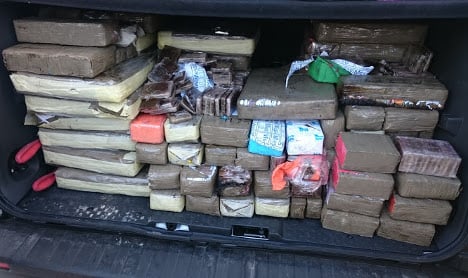 A total of 342.5 kg of cannabis resin – with an estimated street value of over €2 million – was found hidden in the fuel tank of the truck.

French police stopped the vehicle on the A31 motorway, heading in the direction of Nancy-Metz, and on an initial inspection it appeared to be empty. The two drivers, both of Spanish nationality, claimed they were travelling from Spain to repair a truck for a company from Luxembourg.

But police clearly realized something wasn't right and conducted a full search of the truck. After several hours, their attention turned to the vehicle's external tank.

Getting at the illicit cargo inside was no easy feat – police had to drive the truck to a nearby garage, where the tank was loosened and removed from the vehicle, before being cut open to reveal the enormous stash of drugs. The 342.5 kg of cannabis was hidden in a metal case inside the tank, stored neatly in packets of different sizes.