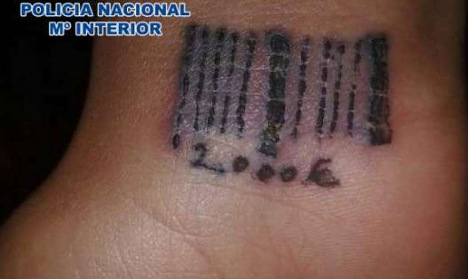 A bar code tattoo on a woman forced into prostitution reading €2,000, or the sum of money she owed to the gang she worked for. Photo: Spanish National Police

The ringleader of the Romanian criminal gang was convicted on charges of human trafficking after forcing women to work as prostitutes in Spain.

In what the Supreme Court labelled as an act of “particular cruelty”, he branded the sex slaves with tattoos resembling bar codes.

Thirteen others were sentenced over the Madrid-based gang’s activities, including the ringleader’s wife and daughter as well as other family members.

According to Spanish police, the gang brought women to Spain under false pretences and then forced them to work as prostitutes in the Spanish capital. Some of those women were underage, came from poor families and were illiterate.

The women were handled with extreme violence and even tattooed with the nickname of the gang leader, or with the sum of money they owed to the gang.

When one woman escaped, she was tracked down by hired killers who held her captive for several days, deprived her of food and tortured her. A bar code was tattooed on the inside of her wrist.

Some of these incidents of torture were videoed by the gang leader, according to testimony from young women who had worked for the pimp.

The Supreme Court rejected all arguments put forward by the defence, noting that the gang’s leader had admitted to some of the abuse during the trial.

In its ruling, the court stressed the pimp had taken “pleasure in the suffering caused to the victim” who was beaten by the hired thugs and had shown himself willing to cause “maximum harm and suffering”.