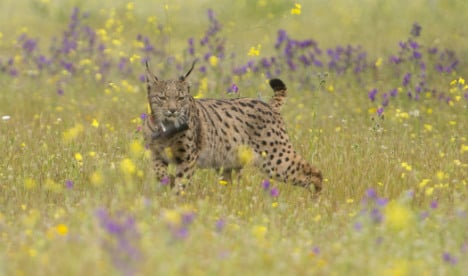 The regional government in Andalusia has signed a deal with a drone company to develop a prototype designed to boost protection of the endangered cat in the fight to reestablish the species in the wild.

It is hoped that the drone scheme will eventually replace the need for the lynx to wear radio devices on collars.

The agreement, which will initially last a year, is designed to “advance the monitoring of lynx that have been introduced into the wild”.

Until now, lynx introduced into the wild under a breeding programme have been monitored using a VHF device attached to a collar.

“These collars have hitherto provided valuable information on the territory and pathways used by individual felines, but the tracking was dependent on the terrain and required daily monitoring by an operator,” said Fiscal.

Enel Green Power will provide a budget of €20,000 so that Microsensory can develop a specially adapted drone to track and protect a species whose population is growing in the wild thanks to a huge effort by conservationists.

Last month the return of the Iberian lynx (Lynx Pardinus) to the wooded hills of the Guadarrama valley outside Madrid was confirmed by a team from Madrid’s Complutense University (UCM) thanks to DNA analysis of scat samples.

Spain has made enormous efforts to boost the wild population of the Iberian lynx, the smaller cousin of the Eurasian lynx, after it was almost wiped out by the end of last century.

Threats including illegal hunting, a loss of habitat and a disease that wiped out their natural prey of rabbits saw the population plummet to just 94 animals in just two small territorial pockets in Andalusia.

But progressive captive breeding programmes that saw creatures released into the wild and a concerted effort by authorities to protect their natural habitat has seen the numbers grow to 327 in the wild by the end of 2014.

But one of the biggest threats to the lynx remains highways with 22 animals killed on the roads last year alone.