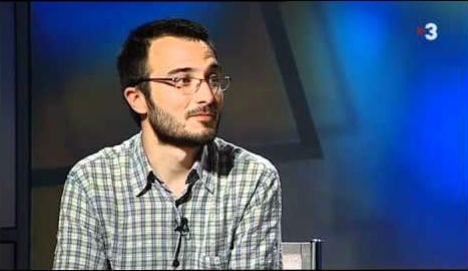 CUP spokesman Albert Botran says this meeting is the last chance for his party to give "Together for Yes" its backing. Photo: YouTube
Separatists won a majority of seats in the 135-seat Catalan parliament for the first time in a September election in the wealthy northeastern region of Spain which is home to 7.5 million people.
Last month they approved a resolution in the assembly that calls for the creation of an independent Catalan republic within 18 months, laying down a major challenge to the central government in Madrid.
But Mas's “Together for Yes” secessionist alliance, which won 62 seats, and the smaller far-left separatist CUP group, which has won tens seats, have so far been incapable of forming a government due to their ideological
differences.
To be re-elected head of the regional government Mas, a conservative, needs at least two favourable votes from the CUP.
The CUP has refused to back Mas because of his austerity policies as well as corruption scandals dogging his party and has pressured “Together for Yes” to put forward another candidate.
To coax the CUP to back Mas the “Together for Yes” on Tuesday promised a series of social measures such as extra funding to homeowners facing eviction and school meals for poor children.
Over 3,500 grassroots members of the CUP, which opposes NATO and European Union membership, gathered at a sports hall in Sabadell, a town some 30 kilometres (18 miles) north of Barcelona, to decide whether or not to back Mas.
The closed door assembly is expected to wrap up at 8 pm (1900 GMT) with the decision announce shortly after at a news conference.
“If the assembly rejects this proposal, there is no more possibility for an agreement” with “Together for Yes”, said CUP spokesman Albert Botran.
The Catalan parliament has until January 9 to elect a leader and form a new government or it must call fresh elections, probably in March, the fourth in the region since 2010.
If the CUP decides to back a government led by Mas, he could be sworn in by the end of the year.
The decision comes as Spain faces weeks of political uncertainty at a national level following an inconclusive general election on December 20.
Prime Minister Mariano Rajoy's conservative Popular Party, a staunch opponent of Catalan separatism, won the most votes but lost its majority in parliament and faces an uphill battle to stay in power.