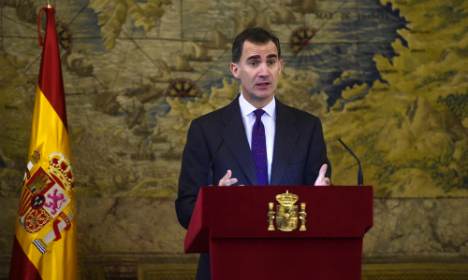 In his televised holiday message, the king said he hoped “the desire for understanding and a fraternal spirit, which are typical of this season, always be present among us.

“The message comes after an election on Sunday which saw two new parties,anti-austerity Podemos and centre-right Ciudadanos, enter parliament with force, ending three decades of two-party domination by the Socialists and the ruling, conservative Popular Party (PP).

The result is a deeply fragmented parliament, with no party enjoying an absolute majority which would allow it to govern alone.

Party leaders have already begun what is expected to be weeks or even months of negotiations to form the country's next government.

“Political plurality, expressed at the ballot box, without a doubt offers different sensitivities, visions and perspectives; and it involves a way of exercising politics based on dialogue, consensus and commitment,” the king said.

“Now, what should matter to all, first and foremost, is Spain and the general interest of the Spanish people,” the monarch, who sat in a chair in the throne room of the royal palace in Madrid.

Felipe, who is riding high in opinion polls since he took over from hi sfather Juan Carlos in June 2014, will next month hold talks with the leaders of each party that has won seats in parliament.

He will then nominate the one he believes is most likely to win a confidence vote in parliament and form a stable government.

Acting Prime Minister Mariano Rajoy's PP will be the strongest bloc in parliament once again but it remains 53 seats shy of an absolute majority in the 350-seat chamber.

But the party is struggling to win support from other groups to pass a confidence vote in parliament next month.

The king also appealed for “national cohesion”, in a thinly veiled broadside against separatists in the wealthy northeastern region of Catalonia.

“I sincerely believe that we are living today in times where it is more necessary than ever to recognise everything that unites us,” he said.