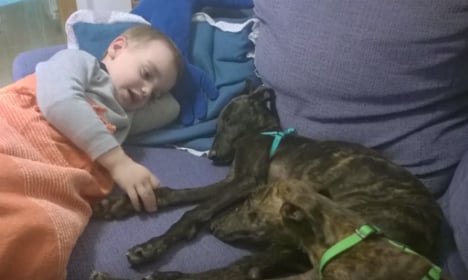 But there is a happy ending. The pups have found a forever home with a family in Madrid who already have a dog that is losing its vision.

The pair of downtrodden pups were discovered by residents at a battered women’s shelter in Navalcarnero near Madrid in November when it was noticed that one refused to leave the side of the other and appeared to be guiding her through the fields.

It emerged that the male dog, who is darker in colour, was permanently at the side of his lighter-coloured sister as she took tentative steps through scrubland searching for food. Pisper (L) and Blinder just after being rescued in November. Photo: El Refugio

“The male dog seemed to be fully aware of the blindness of his sister and would not be separated from her for a single second, he was protecting and guiding her,” said the dogs rescuer at the time.

Named Blinder and Pisper by El Refugio, the animal charity that runs a shelter in the capital, the pups were taken in and given veterinary attention.

And amazingly, with treatment Blinders eyesight has been fully restored.

The puppies made headlines with their heart rending story and the charity was inundated with rehoming offers from across Spain and abroad but it was a Madrid family who was chosen as their adopters.

WATCH: Video of the two puppies meeting their new family:

The pups are settling into a new home with Cristina and Sergio, their three children and a ten-year-old golden Labrador named Puk, who is losing his sight.

“It is stories like Blinder and Pisper's that reassure us that the spirit of Christmas is very much alive,” said Nacho Paunero,  the director of E Refugio. “It is so so difficult to rehome dogs together and that was very important with these two because of their story.”

“Not only will the two dogs be together in the heart of a family to surround them in love and fun but also they will also be the new companions and protector to Puk, a ten year old lab who is losing his vision just as Blinder is regaining hers,” he said.

“Now that is a really happy ending.”