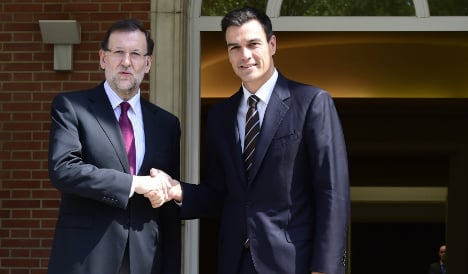 “Mariano Rajoy and Pedro Sanchez will meet at 12 pm (1100 GMT)… for the first time since the general election,” Rajoy's office said in a statement.

The opposition Socialists won 90 seats, followed by the far-left Podemos with 69 seats and the centre-right Ciudadanos with 40.

The outcome means parliament will be made up of four main groupings with significant clout, as opposed to the usual PP and Socialists tandem – putting an end to Spain's traditional two-party system.

Rajoy offered on Monday to “launch a process of dialogue” with other parties to try to form a government, “to offer certainty within and outside Spain”.

El Pais reported that Rajoy will offer the Socialist Party (PSOE) leader, Pedro Sánchez, the possibility of making constitutional reforms in exchange for his party’s abstention at the investiture vote.

A Socialist could also become speaker of the lower house, reflecting the fact that this party came in second on Sunday with 90 seats, the newspaper said.

But the report was emphatically denied in a statement from Rajoy's office late Tuesday night.

Rajoy has said he would reach out only to parties defending the unity of Spain or its European commitments — appearing to rule out the anti-austerity Podemos and two Catalan separatist groupings that secured 17 parliamentary seats.

And the Socialist Party (PSOE) has already said it will not back a Rajoy-led cabinet.