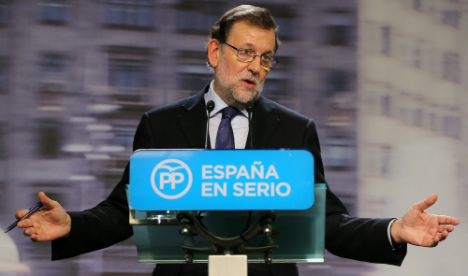 “We have the responsibility to launch a process of dialogue to offer certainty within and outside Spain,” he told reporters in his first press briefing since Sunday polls that saw two upstart groupings, Podemos and Ciudadanos, come third and fourth, ending decades of two-party rule.

But Rajoy cautioned that he would reach out only to parties defending the unity of Spain or its European commitments — appearing to rule out far-left, anti-austerity Podemos and two Catalan separatist groupings that secured 17 parliamentary seats.

“Spain cannot afford a period of political lack of clarity that would spoil the progress achieved during these years,” he said.

But the 60-year-old has his work cut out, as the Socialist Party (PSOE) – which came second in legislative polls – has said it will not back a Rajoy-led cabinet.

With the PP winning only 123 seats – far short of the 176 it needs for an absolute majority – the PSOE and Podemos are key to whether Rajoy can form a government.

Centre-right upstart Ciudadanos, which came fourth, has also ruled out backing the premier.