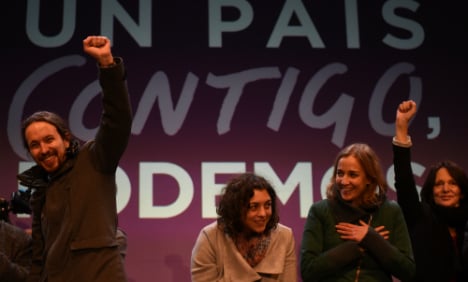 Podemos has been cast as a potential kingmaker for the next government after it gained a surprisingly high 69 seats in a parliamentary election on Sunday that ended the two-party system that ruled the country for over three decades.

“Our message to Europe is clear. Sovereignty is a priority for us in terms of the organisation of the political system. Spain will never again be a periphery of Germany,” Podemos leader Pablo Iglesias told a news conference.

Podemos, which was founded in January 2014, is close to Greece's ruling Syriza and it shares the Greek formation's anger at the German government for enforcing austerity policies in Europe.

Spanish Prime Minister Mariano Rajoy's conservative Popular Party won the most votes in Sunday's election but lost its absolute majority in the 350-seat parliament. Spain's main-left-wing parties said Monday they would prevent him from forming a government.

Iglesias said his party's conditions for joining a leftist coalition include fixing rights to housing, healthcare and education in a new constitution.

He also wants a national agreement to recognise that Spain is a “plurinational country”, allowing regions to hold self-determination referendums.

Podemos came in first place in Catalonia and the Basque Country, two wealthy northern regions that have strong independence movements.

It is the only national party which favours allowing Catalonia to hold an independence referendum, as a majority of people in the region desire.

The Popular Party won 123 seats in the election, far below the 176 seats needed for an absolute majority and down from 186 seats in the outgoing parliament.

The Socialists followed with 90 seats while another new party, centre-right Ciudadanos came in fourth place with 40 seats.

The results mean parliament will be made up of four main groupings with significant clout, as opposed to the usual Popular Party and Socialists.

Iglesias, a fan of the TV series “Game of Thrones” who has described politics as “the art of accumulating power”, said the election outcome opened a period of “historical compromises”.