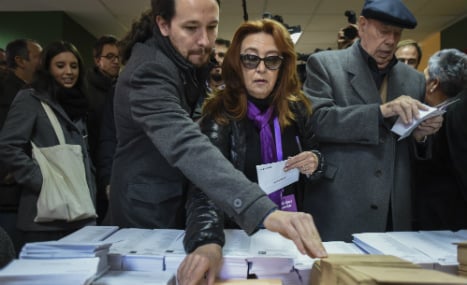 “They had years to show us what they could do and they showed us nothing,” said Carmen Varela, 57, as she voted in A Coruna in the northwestern region of Galicia, the homeland of conservative incumbent Prime Minister Mariano Rajoy.

“We want to put an end to corruption and that no party have an absolute majority in parliament anymore to do what they want,” added Varela, a teacher at a public high school.

She is part of a wave of voters across the country who are shunning Rajoy's Popular Party and its traditional Socialist rival that have alternated power since 1982, deeming them unable to resolve Spain's political and economic woes.

Angered by steep public spending cuts, low salaries, a sky-high jobless rate of 21 percent and a string of corruption scandals, many voters like Varela are turning instead to the upstarts – far-left Podemos and business-friendly Ciudadanos.

“We have had many years of bipartisanship — it's time to renew politics,” said 53-year-old, grey-bearded truck driver Francisco Perez, after voting for Podemos in L'Hospitalet de Llobregat in the northeastern region of Catalonia.

“We have a great country that does not deserve these politicians and so much corruption,” he added, saying he had to work much more to earn much less since the start of Spain's economic crisis in 2008.

In a curious coincidence, the walls of the high school where he voted are orange and purple — the party colours of Ciudadanos and Podemos.

Both parties have portrayed the Popular Party and the Socialists as being more concerned with maintaining their own grip on power than with voters' needs, and surveys suggest they will enter parliament with force.

The Popular Party is expected to win the largest share of the vote, but it is almost certain to lose its absolute majority in parliament, meaning it will need to form a cross-party pact to govern.

Post-election scenarios: Who will be Spain's next Prime Minister?

“I hope the new parties make pressure, that they oppose the Popular Party and bring out its dirty laundry, the corruption,” said Jonathan Pozo, 27, after voting for Podemos at the school.

“I voted for Podemos because at least they give that impression of change, of a return to social policies of the left,” added Pozo, who has not been able to find a job since graduating with an engineering degree in June.

In Valencia some 400 kilometres (250 miles) to the south, Ines Cebolla, a smiley 84-year-old pensioner who in the past voted for the Socialists, had switched to Podemos this time around.

“It's wonderful. Let's see if things improve,” she said.

But not everyone was seduced by the new parties.

At a polling station in an upscale neighbourhood near the Prado museum in Madrid, many voters remained loyal to Rajoy, whom they credit with steering Spain away from economic collapse when he took power in 2011 and putting it on the path of recovery.

“This election is very important. After four years of effort, this is not the moment to throw everything away,” said Maria Jose Pineiro, 52, an art magazine director.

“With Podemos we are heading towards 'Chavismo',” added Pineiro, in reference to the populist left-wing regime put in place in Venezuela by the late Hugo Chavez in 1999.

Cristina Gomez Zubeldia, a 57-year-old antiques dealer, said she feared that Podemos, Ciudadanos and the Socialists would form an unstable coalition against the Popular Party.

“That would set us back years and make us lose credibility in Europe,” she said.

By Daniel Bosque with Paloma Martinez in A Coruna, Guillem Hidalgo in Valencia and Michaela Cancela-Kieffer in Madrid

Follow The Local's election live blog on Sunday evening for all the latest on the Spanish elections.