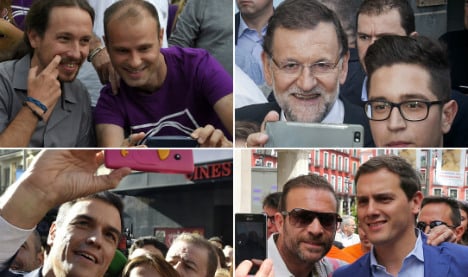 Sunday’s general election in Spain not only promises to be the tightest race in its democratic history but also the most unpredictable, with two newcomers on the political scene putting an end to the traditional bi-partisan system and ushering in a more complicated parliament.

Polls are not legally allowed to be published during the last week of campaigning so it’s hard to really know what last minute events might be influencing voters, or what might be swaying the one in four voters who have yet to decide for whom they will cast their vote.

What seems to be consistently predicted in the polls – as illustrated in the 'poll of polls' compiled by El Español – is that the ruling Popular Party are likely to win the most votes, although will fall far short of the absolute majority that they would require to govern alone, signaling a dramatic decline in support since the nation last went to the polls in a general election.

But come Sunday these are scenarios that Spain could be facing:

A surprise victory for the PP Photo: AFP
Mariano Rajoy and his conservative popular party defy all expectations and the poll predictions and pull a surprise victory out the bag managing to secure at least 176 seats in the 350 seat lower chamber.

Last minute waverers may decide to plump for the safe and hands of Mariano Rajoy, at least when it comes to dealing with Spain’s economic situation, fearful that any other party may destable Spain’s fragile recovery.

Perhaps people will overlook the failure of the PP to tackle head on the numerous corruption scandals that have tainted members of the party and their associates and instead embrace his predictable persona, choosing to entrust the next four years to someone with experience.

Sound impossible? Well David Cameron’s Conservative party pulled it off in the UK in May. Mariano Rajoy and Pedro Sánchez. Photo: AFP
Could the PP and the PSOE take a leaf out of Germany’s book and form a partnership along the lines of the Christian Democratic Union and the Social Democratic Party?

After all, both are establishment parties that have taken it in turns to share political power since Spain’s transition to democracy and both are united by a common enemy:  the upstart newcomers of Podemos and Ciudadanos.

But that is where the similarities end. So diversely opposed are the politics of the PP and the PSOE that it seems unlikely they could ever be bedfellows and would alienate their core voters if they were ever to try. There may be common ground between these two parties, especially when it comes to economic liberalism and a desire to uphold the unity of Spain in face of Catalan breakaway movement.

But Ciudadanos have made reform and transparency the mainstay of their campaign and it wouldn’t play in their favour to compromise at the first fence.

Whatsmore,  Albert Rivera has been adamant that he would not support Mariano Rajoy as Prime Minister, although might he be less averse to his deputy Soraya Sáenz de Santamaría? There is a very real possibility that the PP may win the largest number of seats but still be locked out of a government.

It’s three rival parties seem likely to be able to secure more than 50 percent of the seats in Congress and as such could team up to make an alliance to rule, even if they are unable to find enough in common to form a straightforward coalition.

This scenario would serve the PSOE best if they won the second biggest share of the vote and would likely see Pedro Sanchez as leader but it would be an unstable grouping where Ciudadanos and Podemos might struggle to find common ground.

A government led by Albert Rivera Widely tipped as the kingmaker as leader of the party likely to be in the best position to offer a coalition partnership, the ambitious young Rivera has steered clear of talking about potential pact-making and spoken of desire to avoid the same fate as Britain’s Nick Clegg, whose Liberal Democrat party was decimated after going into coalition with the Tories.

But what if the 36-year-old exceeded expectations and instead of playing kingmaker, took the role of ‘king’ himself?

He does after all have the highest approval rating of all the party leaders.

Polls had put Ciudadanos neck and neck alongside PSOE but what if on the day his party managed to overtake the socialists?

Spain fails to form a government and calls another election It is possible that in the aftermath of the elections, uncertainty will ensue.

The Spanish Constitution dictates that a new Prime Minister is named by the King before parliament votes on his investiture. If the first vote is lost, and a second held within two months also fails, then new elections must be called.

And who knows what would happen then?