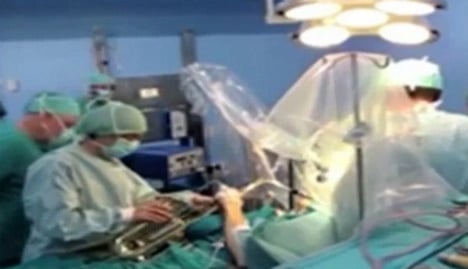 Photo: Screenshot from video by Carlos Haya Hospital
Carlos Aguilera remained conscious and played his saxophone during the procedure in Malaga in what was the first surgery of its kind to take place in Europe.

The 27-year-old was sedated and given painkillers but remained awake throughout the operation on October 15th, attended by 16 medics at the Carlos Haya hospital.

The musician played jazz, including the classic 'Misty' during the operation so that team of surgeons could ensure they did not damage his ability to play music.

Aguilera, who is a member of a Malaga orchestra, appeared at a press conference alongside his surgical team on Wednesday to announce that the pioneering surgery had been successful.

“Without music I am nothing,” Aguilera said.

He was diagnosed with a brain tumour after suffering dizzy spells and feared that he might never play again.

“Two months ago I was on the operating table and now I have my life ahead of me, I have been brought back to life,” he said.

Guillermo Ibáñez, the neurosurgeon who led the medical team carried out an operation that has been pioneered in California. “The patient is a profession musician and his life is all about that,” explained Ibañez.

“It was the only way to operate without damaging the part of the brain involved in musical language,” the surgeon explained.