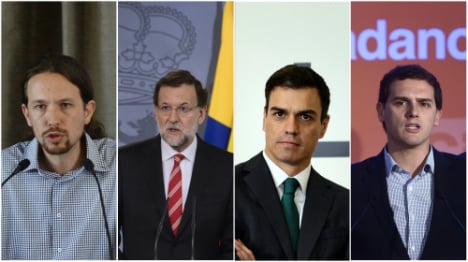 The conservative PP is currently in power in Spain and is led by Prime Minister Mariano Rajoy, 60, who will be seeking re-election on Sunday.

Rajoy was at the helm when in 2011 the Popular won a resounding victory over the socialists securing an absolute majority and although during the subsequent four years his government has steered the nation onto the road to economic recovery, his term has been plagued with allegations of corruption.

Rajoy is not credited as a leader brimming with charisma and is often the butt of jokes for his poor public speaking skills, perhaps the reason he refused to take part in two debates with his fellow candidates – even sending his deputy Soraya Saenz de Santamaria (pictured below) in his place, to the amusement of many Spaniards. Supporters credit the PP for steering Spain successfully out of recession and boosting the country’s economy, while critics decry the party’s failure to tackle corruption and the introduction of draconian new laws such as the controversial 'gag law'.

“I'm an honest politician,” Rajoy repeated during a recent head-to-head with socialist leader Pedro Sánchez, but whether Spaniards really believe him remains to be seen.

Rajoy is selling himself as the only viable option for safeguarding Spain’s economic recovery, despite the fact that the country’s unemployment is still the second highest in Europe, after Greece.

He also promises to stand firm against the independence threat from Catalonia.

While the PP is currently poised to win the most seats according to the latest polls, they will fail to reach an absolute majority. Pedro Sánchez took over as party leader in 2014 and at 43, the former basketball player with his good looks and easy manner promised a revival of the party following its crushing defeat in the last general election, a result of their much-criticized handling of the beginning of Spain’s economic crisis.

The PP and PSOE have taken it in turns to hold power since 1982, but the rise of Podemos and Ciudadanos has ushered in the end of the two party system, and could prove devastating for the fortunes of the PSOE come Sunday.

But the Pedro Sanchez has struggled to really stand out during the election campaign , faring badly in the televised debate between party leaders and Rajoy's stand-in, the deputy prime minister, athough he took on Rajoy a week later in a face to face that saw him push the premier on corruption.

He has promised a “minimum living wage for families without resources” and to reinstate the rights of workers, immigrants, women, whom he says the PP has trampled on.

Sánchez has attempted to shrug off the competition from Spain's two new parties, branding Podemos “far left” and dismissing Ciudadanos leader Albert Rivera as “a younger version of Rajoy”. Podemos, the radical-left party founded by political science professor Pablo Iglesias, 37, in March 2014 did much better than expected in the 2014 European elections (Iglesias was an MEP for 14 months before devoting himself full time to the election campaign), and as part of left-wing coalitions, helped usher in left-wing mayors to Barcelona and Madrid.

The party (which means “we can”) grew out of the massive street protests and indignado movement that swept across Spain in 2011 against the PP’s austerity programme, which saw health and education spending slashed in a bid to tackle the nation's deficit.

A fervent critic of Brussels' austerity measures, Iglesias has also blasted repeated corruption scandals at the PP and Socialist party, and defends “the lower classes” for whom he wants “an emergency social plan.”

After initially storming onto the political scene in the European elections last year, Podemos enjoyed a meteoric rise during the first half of 2015.

But as the year drew on, the party’s early focus on the evils of austerity and the fact they were so pally with Greek party Syriza saw support begin to wane, coming alongside Spain's apparent path to economic recovery, Podemos supporters pack into central Madrid during the 'March for change' in Feb 2015. Photo: AFP

Podemos has dropped some of its more radical proposals in a bid to grab more centrist votes and according to the latest polls, is vying with Ciudadanos for third place behind the PP and the PSOE.

It looks like they have been staging a last minute comeback, thanks in part to an impressive performance by a casually attired Iglesias in the televised leaders debate.

The left-wing party with a focus on corruption and inequality could snatch important votes from the PSOE on Sunday, especially from younger voters. Ciudadanos, which means Citizens in English, began as a regional party in Catalonia in 2006 when its leader Albert Rivera, 36, burst onto the political scene by stripping naked for a campaign poster.

The party launched nationwide in early 2015 and did well in recent regional elections, its anti-independence stance catapulting it to becoming the second most voted-for party in Catalonia.

Ciudadanos is seen as a centrist party, promoting “reasonable change” it is liberal on the economic and social front.

It wants to invest more in research and education, and create a single employment contract system to try and iron out differences between those in stable jobs and others in precarious positions.

It could attract votes from both sides of the political spectrum, posing a threat to both the PP and the PSOE.

Ciudadanos have also proved themselves to be the most media-savvy party, pioneering the use of social media and funny memes to entince younger voters. The party had witty comebacks to digs from the PP and has recruited an army of 15,000 “cyber activists” to spread the party message on social media.

Ciudadanos could end up being the king-makers after Sunday’s election, in which the PP are predicted to gain the most votes but not win an absolute majority.

Albert Rivera has repeatedly said he will not support Rajoy as Prime Minister, leading to speculation that there could be a PP government lead by someone else – most likely Spain’s deputy Prime Minister, Soraya Sáenz de Santamaría.

While the four main parties are likely to take home the majority of votes, there are smaller parties also vying for support. Popular Unity, lead by Alberto Garzón, is a left-wing alliance that includes the United Left and green parties.

Union, Progress and Democracy (UPyD) is a liberal party that rejects all forms of nationalism, including in the Basque Country and Catalonia. The party won three MEP's in the 2014 European elections but is unlikely to make waves in the general election.

Make sure to follow The Local's live blog on Sunday evening, for all the latest on Spain's most exciting general election in decades.