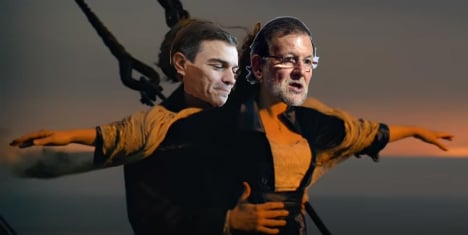 Do voters see something of Pedro Sanchez and Mariano Rajoy in their big screen heroes? Photo: AFP/The Local

So in the run up to Sunday's elections, might film preference predict which party is your favourite? Read on to find out… Voters of Spain’s two traditional parties, the ruling Popular Party and the opposition Socialists, have more in common than they think despite being divided by their politics. Surprisingly, supporters of both parties adore the same schmaltzy film: Titanic.

Could James Cameron’s epic of the “unsinkable” behemoth, serve as a cautionary tale for Spain’s old political elite, who face the real risk of being sunk by Ciudadanos and Podemos on Sunday.

Are the PP and the PSOE, like Titanic, a relic of a bygone age? We might look back fondly on them but we certainly don’t want to hitch a ride with them anytime soon.

Or will Prime Minister Mariano Rajoy be inspired by heroine Rose's famous line “I’ll never let go!” and cling on to power after Sunday’s election?

A tale of two ponytails

Podemos voters can’t get enough of Pulp Fiction, which is no real surprise given that the hero of the Quentin Tarantino masterpiece is a pony-tailed maverick… although the notoriously casually-attired Pablo Iglesias doesn’t quite measure up to the slick, suited and booted Vincent Vega.

A long time ago in a galaxy far, far away

Or in the end, could it all be science fiction for the party hoping to shake up politics in Spain?