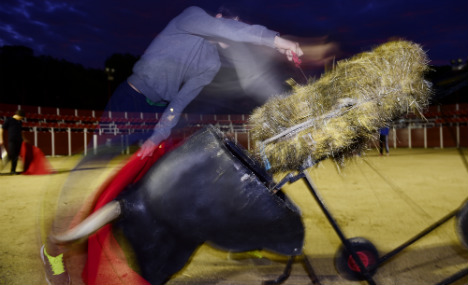 The 17-year-old Tellez  is so passionate about his dream he makes a 70-kilometre (43 -mile) train journey most days from his home in Toledo to the oldest of Spain's 52 bullfighting  academies, the Marcial Lalanda in Madrid.

“I grew up in the world of bullfighting. I have an uncle who was a 'banderillero' (an assistant who sticks the banderilla rods into the bull). He was the one who encouraged me to attend this school,” said Tellez.

He and 40-odd classmates, including two girls, are unfazed by the scorn animal rights advocates cast on what they call a blood sport that brutalises the beast and attracts only a minority of Spaniards.

The students all hope one day to make it into this rarefied, ritualised circle. Some come from as far as Mexico and Colombia, said teacher and retired matador Rafael de Julia, watching as students, wearing fake horns, charge classmates practicing moves with their capes.

They spend 20 hours a week at the school, which opened in 1976 in the Casa de Campo, the huge woods known as the “lungs” of the Spanish capital, on the site called “La Venta del Batan” where bulls destined for Madrid's main bullring used to be held in the past.

Along with the school, it includes holding pens for bulls and a small bullring.

'All want to be stars'

Their coursework includes the anatomy of bulls and the history of bullfighting along with the training – some with live bulls which they are taught to respect as brave and noble adversaries.

The “live” exercises known as “tentaderos, also give the breeders a chance to test the courage of their bull calves,” said De Julia.

The students “all want to be stars … but out of every 100, only one shines and even then they might not make it to the top,” said former matador Jose Luis Bote, one of three directors at the establishment that counted 200 students in its heyday in the 1990s.

The matador, the highest rank, is the one who actually deals the fatal blow to his opponent in the ring. In 2014, of 10,194 bullfighting professionals, only 801 were actually matadors, according to official figures.

And even fewer become real stars in a sport that has faced increasing criticism in recent years.

Aficionados retort that the animal called “toro bravo”– fighting bulls used in the arena — are bred strictly for use in the corridas.

“The end of bullfighting would mean the extinction of a race of animal created by man for combat,” thanks to careful selection over generations, said matador Julian Lopez, better known as “El Juli”, a former student of the Madrid school.

El Juli is notably critical of the way he says bullfighting has been politicised, after several city halls and regions governed by the left have taken measures against the sport.

Madrid city hall, where a coalition of leftists and ecologists took over in May, decided to end a €60,000 ($66,000) subsidy for the Marcial Lalanda academy – sowing doubt over the school's future despite its huge support among Spain's bullfighting elite.

“We believe that municipal budgets must not be used to endorse such practices,” Celia Maier, the city's deputy chief of culture, told AFP. Similarly, the Catalonia region in northeastern Spain banned corridas in 2012, a leftist coalition running city hall in A Coruna in the northwestern Galicia region dropped the “feria” – an annual festival with bullfights and bull running – and the island of Mallorca in the Balearic Islands archipelago off Spain's east coast proclaimed itself as “opponents of bullfighting”.

Today, “only eight percent of Spaniards say they go to the arenas,” said Silvia Barquero, head of Pacma, a party opposed to mistreatment of animals that backs a total ban on bullfighting, bull runs and related activities.

The latest official figures show that 1,868 bull-related events were held in Spain in 2014. Combined, they attracted six million spectators in a country of 47 million residents, according to ANOET, the national organisation that arranges such events, which said the “bull business” brings in annually €3.5 billion.

Partisans of bullfighting argue that the low attendance figures are tied more to Spain's economic woes – in 2014 the country came out of five years of crushing recession or zero-growth though recovery is slow – than to any drop in public enthusiasm for the corridas.

“Some arenas are better attended, some less,” said De Julia looking at his students, “but it is bound to pick up.”