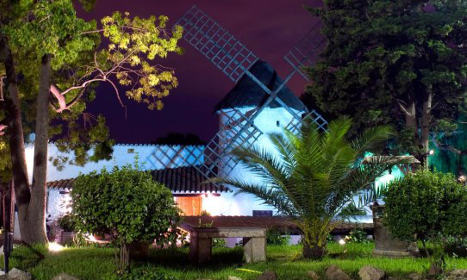 While they might not be as famous as their iconic counterparts on the harsh plains of Castilla-La Mancha, Barcelona has its very own set of windmills.

Built in 1961, the windmills in the suburb of Esplugues are hardly historic, and there is no chance that Don Quixote ever mistook them for giants, or anything else for that matter.

In fact, the Barcelona mills have never actually operated despite their mass of authentic details including wooden crosspieces and conical straw roofs.

But they have earned a placed on the local heritage list in 1984 because of their “unusual and singular profile in the city”.

For decades, the site of the windmills housed the well-known Tres Molinos (Three Mills) restaurant but in 2011 the Miguel Cervantes-themed establishment closed down.

The site was briefly used as a nightclub but when that experiment failed it looked like a chapter in the history of kitsch had come to a close.

Now though, German discount supermarket chain Lidl has put forward a proposal for a 2,500-square metre shopping centre on the site. That plan would see the company reconditioning the restaurant and incorporating the three protected mills into the project’s design.

And because the windmills are on a protected green site, Lidl are proposing the creation of a new park at the other end of Esplugues in a move they see will provide much needed green space for local schools, Catalan regional daily La Vanguardia reports.

The council of Esplugues has already given the go-ahead to the project, with the Catalan regional government now charged with the definitive sign-off.