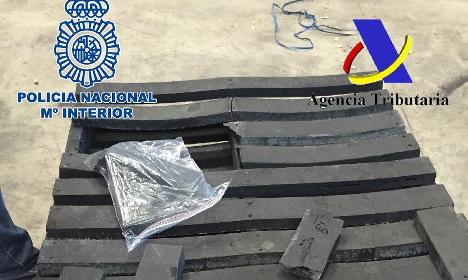 The authorities arrested 12 people in Spain, Dubai and Britain as part of the operation, including two Colombian experts in using chemicals to process cocaine into different formats, police said in a statement.

The shipping container laden with what appeared to be sacks of charcoal on wooden pallets arrived in the Mediterranean port of Valencia, Spain's second-busiest port, on November 30.

But a forensic examination found that the pallets were made of compressed cocaine powder made to look like wood, and some of the sacks contained cocaine disguised as charcoal.

The authorities suspect the group used a charcoal company in Spain as a front to import the cocaine and hide a lab where the drug was extracted from pallets and charcoal, processed and repackaged for distribution across Europe.

Police in October seized 300 kilos of cocaine from a container loaded with pureed bananas that arrived from Costa Rica at the port of Valencia.

Smugglers have used increasingly ingenious methods to get the drug past Spanish customs.

In recent years police have found cocaine inside breast implants, a wig, a plaster cast encasing a man's broken leg as well as inside a 42-piece crockery set and hidden inside a banana shipment.