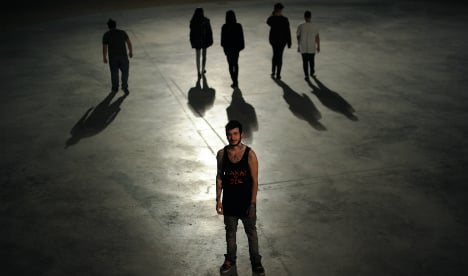 Sleeping in, hanging out in the park and slouching in front of the TV is how 18-year-old Carlos Cabilla, a member of Spain's so-called “lost” generation, fills his days.

Like nearly three in ten Spanish youths, the tattooed and pierced 18-year-old is unemployed, not studying and not seeking work, the product of an education system that experts say fails to adequately prepare students for the job market.

Their plight is a key concern for Spanish voters in a December 20th general election in which conservative Prime Minister Mariano Rajoy faces a hard-fought battle to retain power.

Cabilla lives in Segunda Aguada, a working class neighbourhood in the southwestern port of Cadiz, where the unemployment rate stands at a whopping 37 percent, compared to 21 percent at the national level.

For those under the age of 25, the jobless rate surpasses 60 percent.

Cabilla started studying hairdressing when he was 15 but dropped out after just one term. He has only had a few odd jobs since then.

He then returns to the flat he shares with his father Ramon and his partner, as well as his 22-year-old brother and 13-year-old half-brother.

When asked how he sees his son, Ramon, a who works for the local government, says: “Unmotivated”.

“I am worried but I have no other choice but to put up with it. I can't put him in the street,” he added.

His son is not alone.

During Spain's decade-long building boom many young people dropped out of school to get well-paid work on building sites or in the services sector.

But when the property bubble collapsed in 2008, sending the Spanish economy into a tailspin, these jobs dried up, leaving thousands of youth out of work and without education.

Just over 27 percent of Spaniards aged 15-29 were neither in school nor working in 2013, according to the OECD, compared to 15 percent for the entire 34 nations that make up the club of mostly rich nations.

The situation has become so common in Spain there is even a new word for it – “NiNi”, a colloquial Spanish contraction combining “neither” and “nor” referring to youth who are not studying and who don't even try to find a job.

Part of the problem is that Spain does not offer high-quality apprenticeship schemes and short-term vocational training like those that exist in other European nations like Germany, said Anna Laborda from the ESADE business school in Barcelona.

“There is no practically training that is really useful,” she said.

Vitor Rebola of Spain's Youth Council, which groups 76 youth organisations from across the country, said “there is a lack of ambition on the part of institutions” to help these youngsters.

The body calls for more professional training schemes to fight Spain's school drop-out rate of 22 percent, the highest in the European Union.

“Before it was really easy to dream, today no,” said Ramon.

Today young people “are bitter and they don't talk about their future because they don't have one,” he adds.

“I don't know how my future is going to be, I don't even know what I am going to do this afternoon.”

A fan of tattoos – his neck, chest, arm and hand are covered in them – Carlos dreams of becoming a tattoo artist.

But he said he does not have the €700 ($760 dollars) to pay for the course and has missed the deadline to sign up this year.

Carlos has not bothered to sign up at the local jobs centre.

“It's useless,” said his uncle Antonio Garcia, 38, who himself has been unemployed for the past three years.

Both Antonio and his nephew Carlos plan to vote for new far-left party Podemos, which has made the fight against economic inequality a central part of its platform.