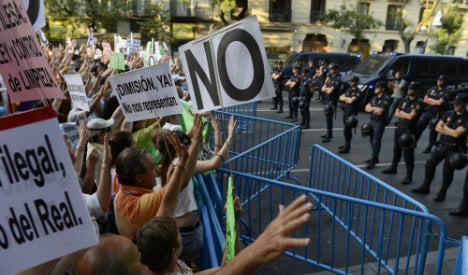 “People stole a lot and nothing ever happened to them,” says lawyer Lola Alonso outside a Spanish court hearing the latest corruption scandal, a scourge that could cost traditional parties dear in upcoming elections.

The 44-year-old has just come out of court in Huelva, a smallish city in the southern Andalucia region where for weeks a judge has been questioning more than 1,000 people, both defendants and witnesses, in connection with the alleged embezzlement of European funds destined for training the unemployed.

It is a problem which has blighted Spain since the 2008 financial crisis, affecting parties from across the political spectrum, as well as companies, unions, banks, celebrities, and even royalty.

“People used to say that corruption was terrible but would then vote for parties that counted corrupt people in their ranks,” says sociologist Jose Pablo Ferrandiz of polling institute Metroscopia.

But when sky-high unemployment and austerity started hitting the middle classes, the sense of widespread corruption became “intolerable”, he added.

And it looks set to be a key issue when voters go to the polls on December 20th.

“It's not right that we young people have to sweat for a job while they fill their pockets,” says Alberto Sanchez, a 28-year-old waiter standing in a square lined with palms and orange trees in Seville, some 90 kilometres (56 miles) from Huelva.

Here, in front of the large grey courthouse, protesters regularly gather to boo those involved in corruption cases, including one that ended the careers of two former presidents of Andalucia, both from the Socialist Party (PSOE).

And in this southern area which is known as the cradle of flamenco, some use music and dance to denounce corruption – like the Flo6x8 collective that regularly barges into banks or even the regional parliament to sing out their disgust.

“Corruption has become an issue of concern for people, thanks to the action of civil society,” says one of the collective's founders, who calls himself “Moody's”, an ironic allusion to the credit rating agency.

“And once politicians realise this (is effecting) the polls, they get concerned.”

According to the Centre for Sociological Research's latest poll, “corruption and fraud” come second in Spanish people's concerns, after unemployment.

An avalanche of scandals involving the major parties — the PSOE and the ruling conservative Popular Party — has contributed to this deep-seated unease.

Even Prime Minister Mariano Rajoy, who is up for re-election in December 20th polls, has acknowledged that graft issues “hurt us more than the decisions taken in the realm of economic policy” – a reference to a raft of unpopular austerity measures.

Since taking power in 2011, his Popular Party has been accused of keeping a secret set of accounting books that was fed by “exterior donations and contributions” for close to two decades.

One of the party's key figures, former finance minister and ex-IMF head Rodrigo Rato, is also being probed for tax evasion, money laundering and other offences as part of three different cases.

And Rajoy's former health minister Ana Mato was forced to resign after being linked to an alleged kickback scheme at the heart of the PP.

To try and limit damages, his government has pushed a bill through parliament aimed at tightening party accounting rules and stiffening penalties for public workers found guilty of fraud or influence peddling.

But public discontent over corruption has not abated and was one of the main reasons for the emergence of two new parties – the anti-austerity Podemos and centrist Ciudadanos – which are both threatening to the two-party monopoly at the polls, says Ferrandiz.

Podemos is the “first party that managed to harness this popular indignation,” he adds, though the faction failed to unseat the Socialists in Andalusia's regional elections in March.

This paradoxical situation could repeat itself at a national level.

“The PP will probably win and we will say 'nothing happened in this country',” says Ferrandiz.

But change is happening, albeit slowly, and Ciudadanos and Podemos will likely snatch a lot of seats from the traditional, mainstream parties, he says.

“Right now, from an election standpoint there are two Spains, one of older people… in mainly rural areas, and another younger, more urban Spain,” he says describing the first group as stuck in their ways and unlikely to change.

Such is the case in Huelva.

“Here, there are few protests over corruption, we're used to it and people don't find it so serious,” says Alonso.