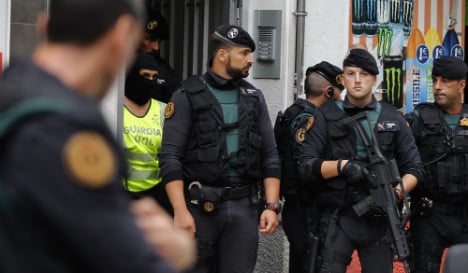 Spanish police at the house of a Moroccan woman suspected of recruiting for Isis. File photo: AFP

Díaz confirmed on Saturday that 29 of the “multitude” of reports received were being followed up after being analyzed and filtered out from the rest of the calls for being “especially sensitive”.

The Spanish government launched the campaign – Stop Radicalism – on Friday to “involve the whole of society in the fight against brutality” according to Díaz, who added that the campaign would be integral to detecting radicalization in Spain.

The launch came a fortnight after jihadists killed 130 people in coordinated attacks across Paris.


The website for the new Stop Radicalism campaign is available in Spanish and Arabic.

There are three ways people can anonymously report possible cases: by calling 900 822 066, via the campaign website www.stop-radicalismos.es and on the mobile app alertcops.

During the current parliament, Spain has arrested 172 suspected terrorists, while this year alone, 98 suspected jihadists have been arrested by anti-terrorist agents.