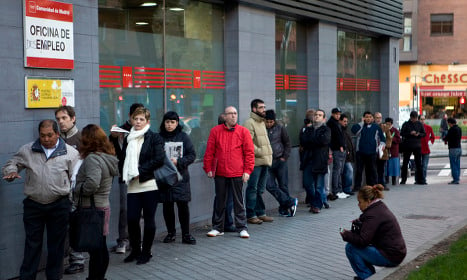 All that was cut short when the 43-year-old was laid off under Spain's previous Socialist government and failed to find another job with the ruling Conservatives — a drop in the four-million-strong ocean of unemployment that has become a crux issue for upcoming elections.

“I had an admin position in a company that made cheque books, and I would work from 9am to 2pm, for 800 euros ($870) a month,” Martin said in a working-class district of Madrid after helping hand out free clothes at the local church.

“We were laid off gradually,” she recalled. Once out of a job, her unemployment benefits soon ran out, so she and her husband — who is jobless too — now depend partly on charity to survive.

They live with Martin's mother, a 73-year-old former cleaning lady without whom they would likely be on the street.

“But she has a pension of 632 euros, and the rent alone is 552 euros,” Martin said, making it hard to make ends meet, even with the occasional odd jobs that her husband manages to find.

Spain was hit hard by the global financial crisis, experiencing five, difficult years of on-off recession that saw unemployment rocket from a low of around eight percent in 2007 to a high of 27 percent in 2013.

After he came to power in 2011, Conservative Prime Minister Mariano Rajoy imposed tough spending cuts and tax rises, and also tried to encourage companies to hire again by, for instance, reducing social security payments for firms hiring workers under 30 and over 45.

In October, official data showed that Spain's jobless rate had dropped to a four-year-low, at just 21.2 percent in the third quarter.

But while the army of Spain's jobless now stands a tad smaller than when Rajoy came to power, it is still the highest in the eurozone after Greece's.

In addition, his critics say that many jobs that have been created are precarious or badly paid, with a quarter of all new contracts lasting one week or less.

Far from resolved, the jobless situation has become one of the centrepoints of the December 20 elections.

Rajoy has promised that the worst is over, pledging to create two million more jobs over the next five years.

The new, rising, centre-right party Ciudadanos, meanwhile, is promising to reform labour laws, and has put forward the creation of a single employment contract to try and iron out differences between those in stable jobs and others in precarious positions.

The main opposition Socialists want to train and find jobs for 700,000 youngsters without a degree or job in a bid to reduce youth unemployment that currently stands at a huge 47.7 percent.

For its part, anti-austerity party Podemos has pledged to bring into force a monthly minimum income of 600 euros.

– No money even for coffee –

Back in Madrid's Vallecas district, Lourdes Rodriguez, who at 41 is also without work, says she has felt no improvement since Rajoy came to power.

Her truck-driver husband, who was also unemployed, has managed to find a job, but he only earns 800 euros a month, compared to the 1,300 euros he used to bring home.

And as a result of his job, the couple are no longer entitled to help from charities.

“I don't buy myself anything. It's been years since I've gone into a bar to have a coffee,” says Rodriguez.

Javier Baeza, the priest at the local church where Martin and Rodriguez are helping hand out clothes, says many here find ingenious ways to survive.

“Some come take clothes to sell them off,” he says.

According to official statistics, more than one in five Spanish households earns less than 16,700 euros a year — barely enough to survive — while the Save the Children NGO estimates that 1.3 million children out of 8 million are growing up in poor families.

“I won't vote for Rajoy, nor for the PSOE (Socialist Party), nor for any of the major parties,” says Rodriguez.

“They have always been up there and they just squash the people, on the right or on the left — they're all the same.”