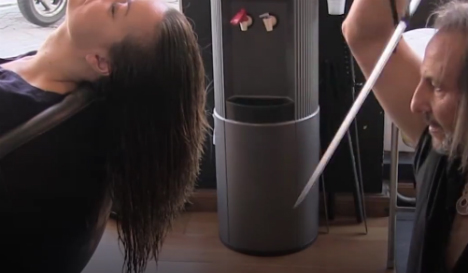 Alberto Olmedo is no ordinary hairdresser, eschewing one pair of scissors in favour of swords and fire, his exploits have made him go global after featuring in a video for news site AJ+

From his salon in Campamento, in the south of Madrid, Olmedo offers an extremely unconventional haircut using age old traditions that these days, look quite scary.

“People have been using small daggers to cut hair for hundreds of years,” the hairdresser told Spanish daily, El País.

In the video, which has had an incredible 122 million views since it was uploaded to Facebook on Thursday, Olmedo is seen chopping hair with six pairs of scissors at once, burning the hair off a woman with fire and slashing off hair using two huge swords.

“Sometimes you have to use a bit of your imagination just to get positive results,” he adds.

But whether the majority of Spanish women would be prepared to let Olmedo – and his daggers and fire – loose on their precious locks remains to be seen.

“Talk about hair damage,” said Eve Ankh, while Leanne Davies remarked: “I notice how the video quickly skimmed over the end results and even from that it was clear the women looked exactly like they had their hair cut by a man with a sword.”

“When you have to make that hard life decision if you wanna be a ninja or a hair dresser.”