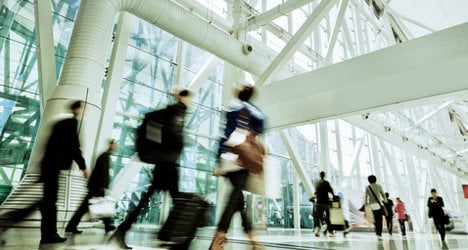 The number of Spaniards who left the country in the first half of 2015 climbed 30 percent on the same period a year earlier, marking the biggest exodus since the economic crisis began, data released on Friday shows.

The National Statistics Institute (INE) registered 50, 844 Spaniards who left the country to live abroad between January and June.

It means that since 2008 when Spain was plunged into economic crisis, 424,004 Spaniards have upped sticks and left, most driven abroad by the lack of employment opportunities within their own nation.

In fact the true figures are likely to be much higher as not everyone registers with their consulate when they move abroad.

The UK was the most popular destination to seek a new life followed by France, Germany and then the USA.


The graph above shows figures registering in countries abroad for 2015 and 2014. INE

The figures could play badly for Prime Minister Mariano Rajoy who is seeking a second term for his conservative Popular Party in general elections on December 20th with a campaign focused on the improving economy.

In 2014, Spain came out of five years of recession or zero-growth and the government predicts the economy will expand by over 3.0 percent this year.

Spain reached another depressing milestone earlier in the week with the news that it had recorded more deaths than births in the first half of this year.

Deaths exceeded births by more than 19,000 in the first half of 2015, a turnaround from a year earlier when there were nearly 4,000 more births than deaths, according to the National Statistics Institute (INE) said.

But on a positive note, more foreigners are moving to Spain and those that are returning home, for the first time since the start of the crisis in 2008.

Some 134,000 foreigners were registered as moving to Spain in the first half of the year while just 113,762 departed.