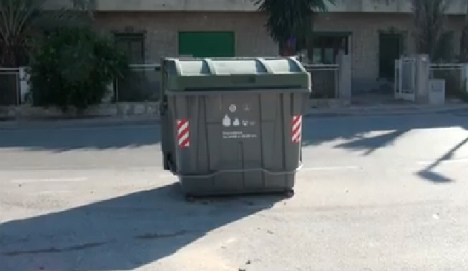 The baby was found in this bin on Wednesday. Photo: Screenshot from La Verdad

The 65-year-old explained how she was walking back to her home on Wednesday evening when she heard what sounded like “mewing” coming from inside the wheelie bin at the end of a busy street in La Albatalía, Murcia.

“I stopped because I heard what sounded like a cat coming from inside the bin,” the woman, who doesn’t want to be identified, told local newspaper La Verdad.

“I go to mass everyday and as usual I was on my way home and because it gets dark early, I was walking on the road,” she explained. “I don’t see very well and the pavement is uneven.”

Fortunately her route took her past an area of bins, located just off an intersection of busy roads.

“I heard the meows and tried to open the lid, but I couldn’t,” she said.

But at that moment a jogger appeared and she stopped him to ask for help.

“He told me, don’t be nervous madam but 'it’s not a kitten, it’s a baby',” she said, adding that the baby was placed inside a gift bag, which had the handles tied and small holes made in it so he could breathe.

“We couldn’t reach the baby because the bag was right at the bottom of the container,” she said. “We were both shaking like jelly.”

The baby boy, who is estimated to be less than two weeks old, appeared healthy but has been taken to the local hospital for observation and until a home can be found for him.

“I am a mother of three children with lots of grandchildren and I just can't understand how anyone could do that,” she said, admitting that she had offered to take the baby home herself.

Police said that if the woman had not found the baby at 8pm on Wednesday, he may well have been crushed when the containers were emptied into rubbish trucks in the early hours.