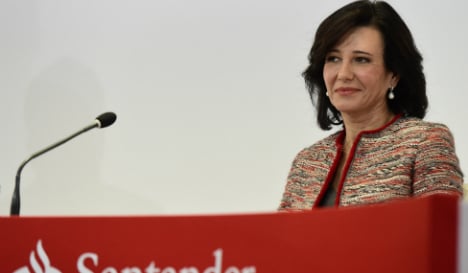 Ana Botín was appointed chairwoman of Spanish bank Santander in September 2014 on the death of her father, former chairman Emilio Botín.

She was awarded the title of DBE in recognition of her services to the UK during her time as CEO of Santander UK, a position she held between December 2010 until she took over the helm from her father.

Botín, who regularly makes the lists of the most powerful women in the world, is one of only a handful of Spaniards to be awarded an honour from the Queen.

The British Ambassador to Spain, Simon Manley, said: “I am delighted that Ana Botín has received this honour, reflecting her exceptional contributions to the UK economy and society.  The United Kingdom welcomes foreign investors – large and small – that wish to expand overseas, for the opportunities that it offers to those companies and the benefits that it brings to our country.

“In particular, Ms. Botín positioned Santander as a major provider of lending for small and medium-sized UK businesses, complementing the UK government’s wider efforts to boost overseas trade under the newly launched 'Exporting is GREAT' campaign,” he said.

As CEO she led the transformation of Santander UK following the merger of Abbey National, Alliance & Leicester and Bradford & Bingley building societies and oversaw the steady growth of the business to its current position where it has around 860 branches across the UK, serves 14 million customers and employs 20,000 people.

In July, Botín was appointed to Prime Minister David Cameron's Business Advisory Council, the only representative from a foreign company to do so.

The award also recognises Ana Botín’s voluntary contribution. In 2010 she joined the Board of Trustees of the Mayor’s Fund for London, a foundation that focuses on projects to improve employment opportunities for disadvantaged children.

And in 2013 she was appointed as one of five external members to the Financial Services, Trade and Investment Board, which was established by the Chancellor George Osborne to promote the UK’s financial services industry.

Ms. Botín has also been a strong supporter of the link between education and entrepreneurialism.

“Thousands of students and entrepreneurs across the UK have benefited from the scholarships, travel grants, projects and awards since the bank signed the first of its 80 collaborations with UK universities in 2007, as part of its long term commitment to higher education,” read a statement from the British Embassy in Madrid.

Honorary knighthoods (such as DBE) are appointed to citizens of nations where Queen Elizabeth II is not Head of State, and may permit use of post-nominal letters, but not the title of Sir or Dame.