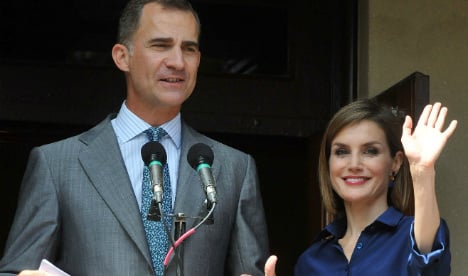 “King Felipe VI, accompanied by Queen Letizia of Spain, has accepted an invitation from The Queen to pay a State Visit to the United Kingdom from 8th to 10th March 2016,” a palace spokesman told The Local.

It will be the royal couple's first visit to the United Kingdom since Felipe became king, in June 2014, after his father, King Juan Carlos abdicated.

Since then  the Spanish and British royal families have paid a number of formal visits to each other’s countries.

King Felipe and Queen Letizia will stay at Windsor Castle during the three-day visit.

The British Ambassador to Spain, Simon Manley, has welcomed the announcement of a State Visit to the United Kingdom.

“The British government is delighted that Their Majesties King Felipe VI and Queen Letizia of Spainhave accepted the invitation from Her Majesty The Queen,” said Mr Manley.

“This State Visit will celebrate not only the long and deep royal and historic ties between our two countries, but also our strong relationship as partners in the European Union, NATO and United Nations.  We enjoy close connections in terms of culture, trade, investment, security and defence. This is an opportunity to celebrate and deepen those links.”

Today, the United Kingdom and Spain are close partners in the EU, NATO and United Nations, among numerous international organisations; and cooperate together through the UN Security Council, of which Spain is a current member.
Nearly 300,000 Britons are registered as residents in Spain and 15 million visitors came from the UK last year, whilst an estimated 131,000 Spaniards are resident in the UK and two million visited in 2014.
The Spanish royals have made several foreign trips since taking to the throne in 2014, including to the United States in September 2015.