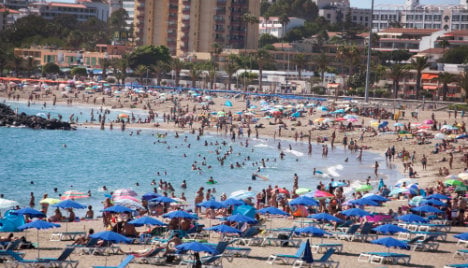 More than 60.8 million tourists decided to spend their holidays in Spain between January and October 2015, according to new figures.

The figure marks a 4.4 percent rise in tourist numbers compared to the same period in 2014 according to figures released on Monday by Spain’s National Statistics Office in collaboration with Frontur, the statistics agency linked to Spain's Ministry of Trade, Energy and Tourism.

In October alone, 6.5 million tourists visited Spain, a whopping 10 percent more than during the same month in 2014.

Britain led the hoards of holidaymakers flocking to Spain: 1.6 million Brits visited in October alone, a quarter of all tourists.

Next came the Germans, who made up 16 percent of all tourists who visited Spain, followed by the French (15 percent).

The Spanish tourist industry is waiting excitedly for the end of year figures, which are widely expected to be record-breaking as many people opt for Spain over more volatile holiday destinations such as Egypt, Turkey and Tunisia, where in June gunmen opened fire on the beach of a Spanish hotel chain, killing dozens of tourists.

The instability caused by Greece’s debt crisis and migrant influx into Italy have also added to many tourists choosing Spain as a safe sunny alternative.

Add to that the weak euro, which has helped attract more visitors from the United States as well as proving an extra draw to British holidaymakers.