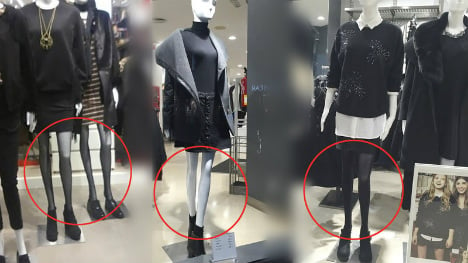 The petition entitled “INDITEX: No more anorexic mannequins!” closed this week with an incredible 111,822 signatures on change.org.

“The fashion industry needs to realize the importance this type of thing has in society and the impact it can have, making people feel inferior and insignificant to not see themselves reflected in these beauty standards” said Anna Riera, who started the petition.

Riera describes in the petition how she was inspired to launch the campaign while walking past a branch of the fashion store, Lefties.

“I felt completely ashamed at the human species,” she writes in the petition.

The mannequins’ legs were “the same size, if not smaller, than my arm… and I’m a normal size!” she says.

The petition is addressed to the marketing department of Inditex, the Spanish fashion multinational that is the biggest in the world, owning brands such as Zara, Lefties and Stradivarius.

The petition also calls on the fashion industry to “make bigger sized mannequins to avoid problems such as anorexia and bulimia, which derive from standards imposed by international fashion companies”.

Riera says she has already witnessed 12 of her friends struggle with eating disorders and argued that a large of the problem lies with fashion brands peddling “unrealistic beauty standards”.

“I know changing the mannequins is only a start, but I think it will help lots of people give the issue the recognition it truly deserves.”

Inditex is owned by Amancio Ortega, who recently overtook Bill Gates to take the title of the richest man in the world.

“The mannequins used by Inditex in its stores embody the image of health to which the group is committed, Inditex said in a statement to The Local.

“As for the picture recently published of certain mannequins, the samples shown relate to a relatively small number of old mannequins which have been used by Lefties and do not represent the norms stipulated by the group, which is why they are going to be replaced with immediate effect.

“Inditex is keenly sensitive to all health-related issues. Indeed, in recent years it has participated in a number of initiatives in this field – both public and private – and plans to relentlessly strive to continue to do better on this front”.