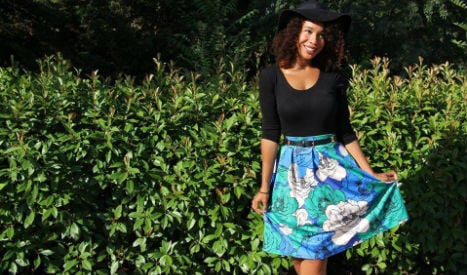 Photo: Danni Roseman
There are so many aspects of Spanish culture that I adore such as the importance they place on family and community, and the way they’ve mastered the elusive work-life balance.

That doesn’t mean, however, that I don’t have moments of utter bewilderment at the clumsy, and unintentionally offensive questions I receive on a daily basis.

Whether it’s because I'm American and our culture, or at least caricatures of our culture, are widely exported all over the globe, or because I'm black and American, and let's face it, we're pretty cool. (See: Beyoncé, Barack Obama, Oprah, Kanye West).

The following are actual questions I’ve received in my last five years here. I make every attempt to answer honestly, and with a spirit of Wal-Mart greeter-esque customer service because whether I like it or not, I have been deemed a cultural ambassador of sorts.

That doesn’t stop me from cringing in awkwardness or laughing in amazement after the fact! Things are always funnier in hindsight.

Question: Do you sing gospel?

My response: No, but I am a fan! Do you happen to sing flamenco? Diego Cigala is wonderful! Question: Do you know how to braid my hair?

My response: I know how to braid my hair! Which presents a completely different set of challenges.

Question: Do all black people have such white teeth?

My response: Well, I can’t answer that because I’ve yet to meet every black person. I however, try to avoid coffee and red wine.

Question: What does your partner think about having black children?

My response: The same thing he feels about having children in general: pretty terrified.

Question: Have you been to Africa?

My response: Africa the continent? No, but those 54 countries are most definitely my bucket list!

Question: Do you get sunburned?

My response: Seeing as how I have skin, yes, I do! It really hurts, doesn’t it!

My response: Have you been watching The Wire again? No. Not ever. Not with an “A” at the end. Not in a song. Not when you’re drunk. Not even in your dreams. No. Just, no.

Question: Do you use a brush? Do you wash your hair?

My response: I do in fact wash my hair. Personal hygiene is for everyone! Crazy, right?

My response: No, it isn’t. It’s actually quite bland. I can feel my taste buds twiddling their thumbs, and tapping their feet out of frustration and boredom.

Question: Why do you wear makeup if you're already brown?

My response: Huh? The same reason you wear makeup: to enhance your natural beauty, and minimize skin inconsistencies. I affectionately refer to these moments as encounters with “racist toddlers”  Why? Racist, because, let’s just call it like it is: unintentionally or not, it’s pretty racist and culturally insensitive.

Toddler? Toddlers spew out babble, and even drop a bit of drool every once in awhile. They laugh randomly, lack the social graces they learn later in life (ideally), and stare in awe at everyday happenings.

There’s no malice in their actions, just curiosity and the absence of a filter. Spain didn’t have a civil rights movement, they just started receiving waves of immigrants in the last 40 years.

It’s very possible that if you go deep enough into the pueblo you may in fact find someone who has never encountered a person of color in their life!

They’re clumsily trying to figure out how to get their questions answered. Considering some of their main references are MTV and The Wire, well, you can imagine why they have said questions.

It’s new, I get it, and I keep this in mind with my responses. I don’t want to scare them away by biting their heads off: I’d much rather promote dialogue in hopes that they never, ever ask these questions to my fellow Black men and women in the future, and most of all,  that they learn.

If that means picking my jaw off the floor every once in awhile, so be it.

Danni Roseman is Community & Content Director for Las Morenas de España, an online community that is redefining the Black experience in Spain. The brand seeks to provide information, inspiration and encouragement for people of color living here or interested in moving to the country.