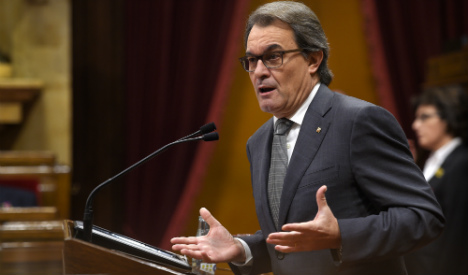 The move leaves the economically powerful region without a government until the end of the year.

Two pro-independence parties won a majority of seats in the 135-seat Catalan parliament for the first time in a local election on September 27th but remain deeply divided over the formation of a new government.

The “Together for Yes” secessionist alliance which promises to break away from Spain by mid-2017 won 62 seats but it needs the backing of the smaller far-left separatist CUP group which won 10 seats to re-elect Artur Mas as president of the regional Catalan government.

Mas' candidacy was rejected by 73-62 in the Catalan parliament two times last month, with only his “Together for Yes” alliance supporting him.

The CUP has refused to back Mas as regional president because of his austerity policies of recent years and his party's links to corruption scandals.

To be elected Mas needs at least eight abstentions from CUP lawmakers and two favourable votes.

The two camps have been negotiating and CUP announced on Tuesday that it will take a final decision on December 27th at an assembly of its members.

CUP is demanding that “Together for Yes” present a more “consensual” candidate for president of the regional government and commit to a boost on social spending.

The Catalan parliament has until January 9th to elect a leader and form a government or it must call fresh elections, the fourth since 2010.

“They must hurry up because we are running out of time,” CUP lawmaker Sergi Saladie told a news conference.

The delay in the formation of a regional government could allay tensions between Catalonia and the central government in Madrid over its secession drive ahead of a December 20th general election in Spain.

While the pro-independence camp are divided on the formation of a new government, last month CUP and Mas' alliance joined forced to approved a resolution which calls on the regional assembly to start working on legislation within 30 days to create a separate social security system and treasury, with a view to completing independence in 18 months.

While the pro-independence camp won a majority of seats, it got only 48 percent of the popular vote.

Catalonia, a region of 7.5 million people that represents nearly a fifth of Spain's economic output, has its own distinct language and culture.