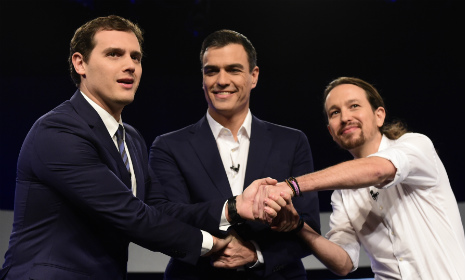 Corruption, unemployment, austerity, an independence movement in Catalonia… Many of the hot-button issues that have hit the country during Mariano Rajoy's four-year-term were broached and while criticism flew on all parts, the prime minister was by far the main recipient ahead of legislative elections on December 20th.

“I regret that the prime minister is not here as I would love to remind him that the police searched the headquarters of his party for 14 hours,” Iglesias said as the candidates discussed corruption.

“Maybe that's why Mr. Mariano Rajoy is not here today,” he added in reference to scandals that have involved members of the ruling Popular Party (PP), and for which the Spanish leader apologised last year.

Sanchez, for his part, lamented the fact that Rajoy had been “absent” over the past four years, describing him as looking the other way “while problems grew and grew.” The economy — and particularly unemployment which stands at around 22 percent — was one of the main topics up for debate in a country that is only just starting to recover from a devastating crisis.

Rajoy has made economic recovery one of the mainstays of his re-election campaign, but opponents of the PP say many of the jobs that have been created are precarious or badly paid.

Rivera put forward the creation of a single employment contract system to try and iron out differences between those in stable jobs and others in precarious positions.

Iglesias called for help for small and medium size enterprises, while all three urged reforms to allow the return of qualified Spaniards from abroad.

This was the third debate between Rivera and Iglesias, who at 36 and 37 are the country's new, young political stars.

But it was the first to include Sanchez, who is considered the main opposition candidate despite a weekend poll putting him neck-and-neck with Rivera.

Rajoy declined to participate in the debate organised by the El Pais daily and broadcast online, and chose to attend a one-on-one televised interview instead.

His absence sparked a surge of comments on Twitter.

“Let's see if Rajoy comes back from the toilet,” one user joked, posting a picture of the debate stage complete with the three candidates and the fourth, empty lectern.

Theis spoof video of the debate has already gone rival.