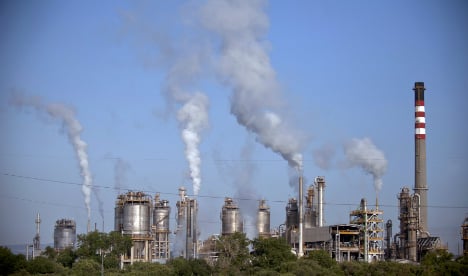 Spain may have reduced its carbon emissions in 2014 by 2.1 percent, but it is still way below the European target of five percent. Experts predict Spain could have temperatures similar to North Africa by 2050 if climate change continues to affect the country at its current rate.

As EU leaders meet for climate talks in Paris, The Local takes a look at how climate change could affect Spain. Loss of ecosystems and habitat could spell the extinction of the brown bear, as well as dozens of other animals. The Cantabrian brown bear is an endangered species in Spain, which is home to the highest number of at-risk species in Europe.

Most polluted country in Europe A report by the European Environment Agency in May 2015 declared Spain the most polluted country in Europe, exceeding safe pollution levels 150 times in summer 2014, putting people at risk of breathing problems and lung disease. We already know that summer 2015 was the hottest on record in Spain – so as the summers heat up, Spain's pollution levels could pose a real threat to people's health. Climate change could see increased storm activity over northern Spain, with a high risk of severe flooding that could have a serious effect on the country's fishing industry. Greenpeace Spain estimates that over 200 hectares of land along the Bay of Biscay will be at serious risk of flooding during the second half of this century. Half of this area is comprised of urban and industrial areas. As sea levels rise, there will be an increase in coastal erosion around Spain, which could have serious implications for one of the country's most important industries – tourism. Take a look at how Spain's southern coast might look if sea levels rise by five metres (above). Spain registered its hottest year on record in 2015, including a record-breaking heatwave that lasted from June to July. If climate change continues at its present rate, Spain can expect hotter summers, more heatwaves and forest fires. Rising temperatures could spell the end of Spain's thriving wine industry, changing the taste of grapes and potentially destroying whole vineyards. “Winemakers have already seen their production affected, with shorter maturation periods for the grapes, less water and changes in the patterns of diseases,” says Greenpeace Spain. Climate change could have a devastating effect on Spain's agriculture, potentially wiping out some of the country's most popular products such as olives and lemons. The islands’ subtropical climate could spell disaster if temperatures continue to rise, causing extreme weather conditions including torrential rain and the potential increase in toxic algae which could destroy beaches and have a catastrophic effect on the tourism industry in the Canary Islands. Spain's Ministry of Agriculture, Food and the Environment, in a report published on the effects of climate change in Spain, spoke of several ways in which it could affect Spaniards' health. More heatwaves and cold snaps could have a serious effect on people's health, as could air pollution, which could cause respiratory problems. Warmer weather could also see the rise of mosquito-borne diseases in Spain. Spain has some world-class ski resorts, and Europe's most southerly (in the Sierra Nevada mountain range near Granada), but all that could be ruined if climate change continues and Spain receives less and less snowfall.