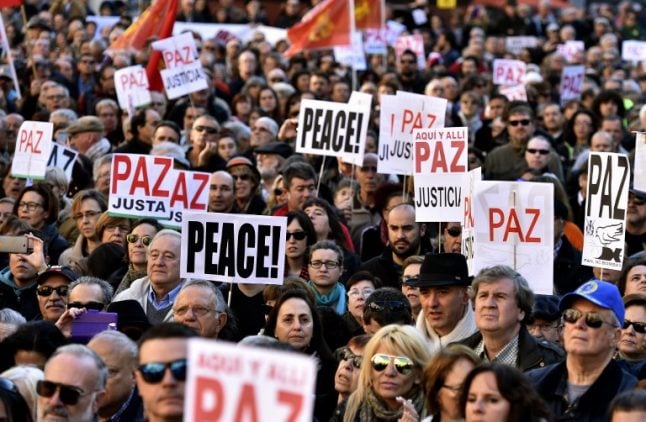 The Madrid protests were organised by the group #NoEnNuestroNombre ((#NotInOurName) Gerard Julien/AFP
Many Spaniards believe the Al-Qaeda-inspired bomb attacks in the Spanish capital in 2004, which killed 191, came in retaliation for their country's involvement in the Iraq war.
The protests were organized by the collective #NoEnNuestroNombre (#NotInOurName), and were attended by some of the country's leading actors, journalists and politicians.
More than 30,000 people signed the collective's petition condemning both the Paris attacks and retaliatory bombing against Syria.
According to the Publico online newspaper, signatories included leading actors, such as Pilar Bardem, the mother of  the Academy Award-winner Javier Bardem, Alberto San Juan, Juan Diego Botto, and Aitana Sánchez-Gijón,
French foreign minister Laurent Fabius on Saturday assured Spaniards that the attacks on ISIS would be followed up by troops on the ground supplied by Arab countries.
“It will be necessary… France has no intention of intervening on the ground. Foreign troops would be seen as an occupying force. Therefore they must be Syrian, Arab, Kurdish troops,” he told Spain's El Pais newspaper, the
quotes translated from Spanish.
Some 5,000 people also protested in London on Saturday against potential British participation in Syria airstrikes, as political momentum mounted to broaden the fight against Islamic State (IS) jihadists.
Prime Minister David Cameron on Thursday laid out the case for British jets, already bombing IS targets in Iraq, to join France, the United States and others in targeting IS strongholds in neighbouring Syria.
He now insists he will not hold a vote until he is sure he has enough support.