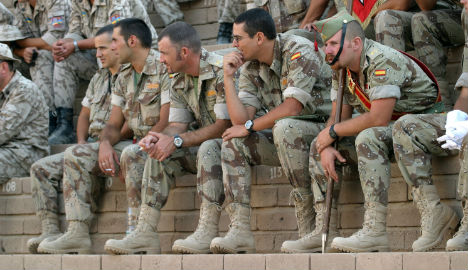 The decision to send Spanish troops (such as the legionaires above) to Iraq in 2003 was blamed for the Madrid attacks. Photo: LCpl. Andrew Williams/US Marines
The attacks saw Al-Qaeda-inspired bombers blow up four packed commuter trains and kill 191 people in retaliation for then prime minister Jose Maria Aznar's decision to join the US-led Iraq invasion, precipitating his party's defeat at ensuing elections.
“The Spanish experience of the war in Iraq was disastrous and public opinion is very careful and sensitive to this type of intervention,” said Nicolas Sartorius, vice-president of the Alternatives Foundation think tank.
“It's logical that when you have an experience like that of 2004 and elections within weeks you react with some prudence, and Rajoy is trying not to repeat Aznar's hugely serious mistakes.”
France said Wednesday that all 27 of its EU partners had pledged to help in some way to strike at the Islamic State group that claimed responsibility for the Paris attacks, but Rajoy has so far remained evasive on the issue.
The Spanish leader, who hails from the same Popular Party as Aznar and was elected in 2011, said Thursday he had not received any official demand for help from Paris.
But he pointed out that Spain was already supporting France in its fight against extremism, particularly with 117 of its troops stationed in Mali and 57 in Senegal.
The hot-button issue has been at the forefront of debate ahead of December 20 elections, as speculation mounts that Spain is considering getting involved in the US-led coalition battling IS, as does criticism of Rajoy's silence on
the issue.
“The prime minister should seek the consensus of the majority of political forces on potential support for military intervention in Syria, not to dodge his obligations but to confront them,” read a comment piece in the
centre-right El Mundo daily. “If this is a war, we have to be with France, without a doubt.”
Rajoy brought together nine smaller political parties on Thursday to agree to an “anti-terrorist pact” that he had already signed in February with the main opposition Socialists.
The pact essentially reinforces police and legal powers to fight jihadists and those who recruit them. The next step, according to Sartorius, would be to adopt a common position agreed with other political parties and submit the decision to parliament, as is now required by law before any foreign intervention.
But opposition is mounting in Spain. Leading personalities, including Barcelona Mayor Ada Colau and Pilar
Manjon, head of an association for victims of Madrid's attacks, have called for peace protests nationwide on Saturday to denounce the use of force in response to extremist attacks.
Their online manifesto has been signed by more than 28,000 people already. Jose Ignacio Torreblanca, director of the Madrid chapter of the European Council on Foreign Relations, said the situation was very different today than
in 2003.
“We're not talking about invading a country without a UN resolution,” he said, pointing out that the Security Council passed a resolution last week authorising countries to “take all necessary measures” against IS.
Sartorius added that the Iraq war was led by US troops “on the basis of false information… destroyed a country and was useless.”
“Now it's a so-called Islamic State that occupies parts of Syria and Iraq, and sends terrorists around the world. There is aggression and it's legitimate to defend ourselves.”