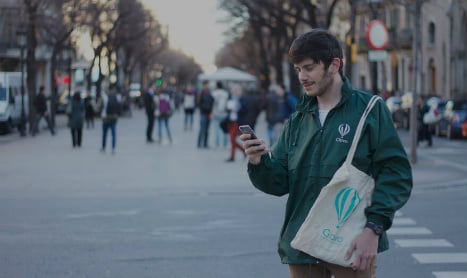 The Spanish startup which was launched in January secured €2 million in funding this week and is set to expand to cities across Spain and beyond next year.

Glovo is an on-demand local delivery service that promises to fetch whatever you want within your city and deliver it to your door within the hour.

Whether it’s an order to pick up your favourite sushi from the Japanese restaurant across town, that pair of boots you tried on last weekend at the little boutique on Madrid’s Calle Augusto Figueroa, or some headache relief tablets from the late night pharmacy, Glovo charges a flat fee of €5.50.

“Our customers order whatever they want, naming the item and the outlet, and we have it there within the hour,” explained co-founder Sacha Michaud, a 45-year-old of mixed Canadian British heritage who now lives in Barcelona. The business was set up by Sacha Michaud (L) and Oscar Pierre. Photo: Glovo

Michaud teamed up with Oscar Pierre and the concept of Glovo was born in January.

“Oscar studied in the US and knew about Postmates and saw the opportunity of doing something like it here. I had a similar idea and so we teamed up and started Glovo in Barcelona before expanding to Madrid and Valencia,” explained Michaud.

“It's not a revolutionary idea but with startups it is all about the get up and go and at that we have been very successful,” he said.

The Glovo app has been downloaded by more than 20,000 people.

“People generally know exactly what they want and know where to find it but our service means it can be cheaper and more convenient to get it via Glovo than travelling across town yourself,” he said.

The order will be delivered by a 'glover' – as Glovo calls its couriers – freelancers who work as much or as little as they like and take home between 70 and 80 percent of the fee plus any tip.

“It’s all part of the sharing economy,” Michaud told The Local. “It’s ideal for students for example who want to make an extra bit of money. It offers flexible hours by connecting when they want.”

For once Spain’s economic crisis has proved a bonus.

“The advantage for us is that there are lots of people who need to do part time jobs to supplement their income, so it has been helpful in terms of our business model.” The company has gone from strength to strength since launching its app in March, growing its customer base by 50 percent month on month.  It now operates in Spain's three biggest cities; Madrid, Barcelona and Valencia.

But the future business model relies on building up premium partners.

“We plan to build relationships with specific restaurants, stores, brands, with partners that fit with our boutique, niche, high-end ethos,” said Michaud. “Our partners are going to be retail stores and not just e-commerce.”

But success relies on quick expansion and holding their own in an increasing crowded competition.

“There are lots of potential global competitors, Postmates in the US and of course Amazon but also Google Express, Uber Rush, to name a few,” acknowledged Michaud.

“But the key to our success is to carve out our space here in Spain and to move quick.”