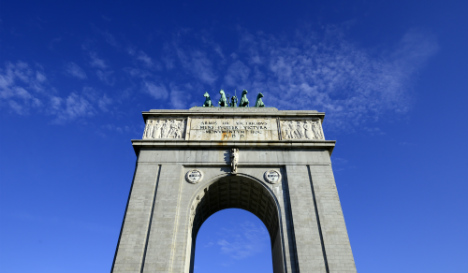 The left-wing group, Ahora Madrid led by mayor, Manuela Carmena, abstained from the vote on Wednesday night, which means the row over Franco street names looks set to rumble on.

Campaigners, led by the Spanish Socialist Party (PSOE) had proposed a motion for Madrid to comply with Spain's Historical Memory laws and remove all Franco related street names from the city within the next four months.

The motion was originally supported by Ahora Madrid but at the last minute the group abstained from voting.

Centre right party Ciudadanos (Citizens) also abstained and the motion was rejected after members of the conservative Popular Party voted against.

“The historical memory law is fundamental for the government team and we have been working on it for months,” said Ahora Madrid spokeswoman, Rita Maestre, who argued that the proposed time scale would limit proper debate.

“The reason for abstaining is the urgency of the motion which prevents a proper debate on the issue from taking place with the maximum respect to the plenary session,” she added.

Madrid city council had been facing increased calls to rename all streets and squares in the Spanish capital related to the former dictator, who died 40 years ago last Friday, November 20th. Madrid's newly elected left-wing city council announced in July that it would enforce a nationwide law, passed by Spain's Socialist government in 2007 but resisted by previous conservative city administrations.

It called for eradication of place names that commemorate the Franco regime and its heroes, martyrs, members of Franco's Falange Party and other prominent adherents.

The Socialist group in the Madrid city government on Friday urged the town hall to move from “words to acts” and “clean the streets of Francoist reminiscences”.

“It is essential for democratic normality that the city cease to pay tribute to these types of people,” Socialist spokeswoman Purificacion Causapie added in a letter sent to the city government.

Many streets have already been renamed under a 2007 “historical memory” law that calls for the gradual replacement of symbols relating to Franco's 1939-75 rule.

But historian Antonio Ortiz, who has spent the past decade compiling a list of Madrid place names associated with Franco, says there are over 170 streets and squares in the Spanish capital which still carry the names of dictatorship officials.

Among the place names are the street of the Fallen of the Blue Division, a unit that served with the Nazis during World War II, and Arriba Espana square, which refers to Spain's old fascist Falange party.

Several vestiges of Franco's dictatorship also remain on historic buildings in Madrid, including a victory arch at one of the entrances to the city, several defence buildings and the El Pardo and Santa Cruz palaces.

Manuela Carmena, a 71-year-old retired judge who was an anti-Franco lawyer in the later years of the dictatorship, was elected Madrid mayor in May, ousting the conservative Popular Party which governs at the national level.