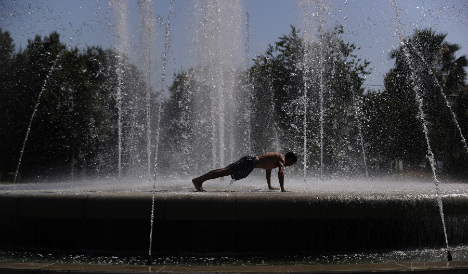 Spain is coming to the end of its hottest year on record, according to a new report published on Wednesday in Geneva by the World Meteorological Organization (WMO).

This year Spain registered its longest ever heatwave, between June 27th and July 22nd, during which temperatures soared to a maximum of 44.9C at Zaragoza airport and 42.6C at the airports in Valencia and on the Canary Island of Lanzarote.

As well as its summer heatwave Spain saw “unusually high temperatures” in May, the WMO report confirmed.

The heatwaves, which constitute “extreme weather events” have been influenced by climate change, according to the report, titled The State of the Global Climate in 2015.

“2015 is likely to be the hottest year on record, with ocean surface temperatures at the highest level since measurements began. It is probable that the 1°C Celsius threshold will be crossed,” said WMO Secretary-General Michel Jarraud.

“This is all bad news for the planet.”

In 2015 the WMO predicts the planet will reach a significant milestone: one degree Celsius above the pre-Industrial era.

But while 2015 will register the highest temperatures ever recorded, it is not too late to reverse the damage caused by climate change.

“The phenomenon is not irreversible,” said Jarraud. “Now is the time to stop the cycle and reverse the trend before it is too late.”

WMO issued its provisional statement on the status of the climate in 2015, and an additional five-year analysis for 2011-2015, to inform negotiations at the U.N. Climate Change Conference in Paris.