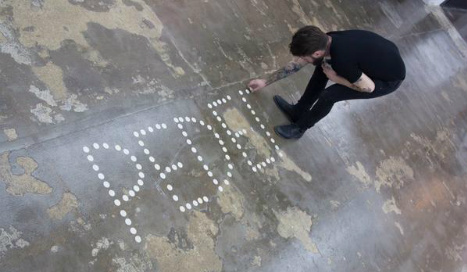 The exhibit, entitled Buried, by Spanish artist Abel Azcona has caused controversy since it opened on Friday.

The exhibition tells the stories of people who were shot and who disappeared during the Spanish Civil War, but also includes a retrospective of Azcona’s work, which includes several pieces that are critical of Spanish society and religion, including the piece “Amen” in which 242 holy wafers spell out “paedophilia”.

The exhibit has caused such outrage that on Tuesday evening someone sneaked into Pamplona City Hall and stole the holy wafers.

Azcona acquired the over 200 hosts used in the exhibit by “pretending” to go to Holy Communion then pocketing the wafers, according to critics, who launched a change.org petition to get the exhibit closed down.

As of Wednesday morning, the petition had amassed over 96,000 signatures.

“The Holy Sacrament of Jesus Christ should not be put on the floor or stolen,” one person commented on the petition.

“How could a human do such a thing?!” wrote another commenter.

“Religion is at the same level as cancer or AIDS, and in fact, it has killed more people than those diseases,” Azcona said in a recent interview with Spanish magazine Jot Down.

The artist, 27, is no stranger to controversy. His previous works include Dark Room during which he was locked in a darkened room for 60 days and nights with minimal food, and La Calle, for which Azcona received hormone treatment to become a transexual prositiute.

Religious groups reacted angrily to the latest exhibit; the Spanish Association of Christian Lawyers filed a lawsuit to close the exhibit, claiming that “over 40,000 people protested the exhibit in less than 20 hours” in a change.org petition and on social media.

“The lawsuit accuses the artist of “stealing consecrated hosts from masses in Madrid and Barcelona” accusing him of a “repeated crime of desecration and crimes against religious sentiment” under Spain’s Penal Code.

Azcona also criticized the “Christians” who had been sending him abusive messages on social media and those who had been leaving graffiti messages around Pamplona calling for the exhibit to be closed.

Even political parties waded into the row, with the Unión del Pueblo Navarro (UPN) making a request in the Parliament of Navarra that the exhibit be banned, arguing that it “threatens the beliefs of a section of society”.

The request was rejected in parliament.

“It has a slight whiff of censorship,” said the spokesman for Basque nationalist party Bildu, Adolfo Araiz.

Spain’s ruling Popular Party has criticized the exhibit calling it an “absolute lack of respect” in a press release.

Protest against the exhibition on Tuesday night.

With all the controversy brewing around the exhibit, on Tuesday evening, the hosts mysteriously vanished, as critics staged a protest outside the exhibition. 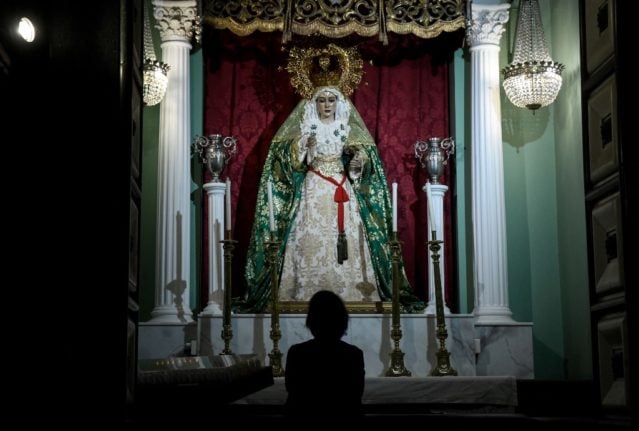 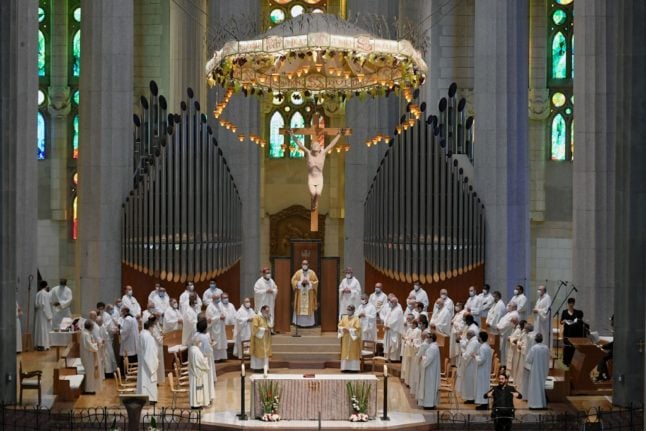 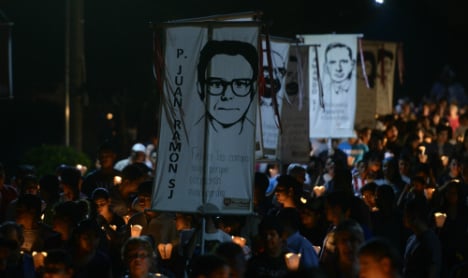 A procession to commemorate the victims. Photo: Marvin Recinos / AFP

“We consider compliance with international arrest warrants to be mandatory, and we must proceed with immediate implementation by the Salvadoran authorities,” Salvador's human rights ombudsman David Morales said late
Wednesday.

In 2011, the former soldiers evaded a Spanish order for their arrest by taking refuge in military barracks in San Salvador.

They also secured a ruling from El Salvador's Supreme Court saying they were protected by an amnesty that pardoned the atrocities committed during the 1980-1992 civil war.

But this time, Morales urged the High Court to “proceed immediately to ensure the arrest of the accused.”

Spanish High Court Judge Eloy Velasco has reissued the orders for the arrest of the former soldiers.

They include Colonel Inocente Montano, a former vice minister of public safety who is serving a 21-month sentence in the United States for immigration fraud.

Morales urged the United States to allow his extradition to Spain.

He also called on the military to “abstain” from blocking the arrest of the former soldiers.

Five of the priests killed in November 1989 were Spanish and one was Salvadoran. The soldiers also killed the priests' housekeeper and her daughter. 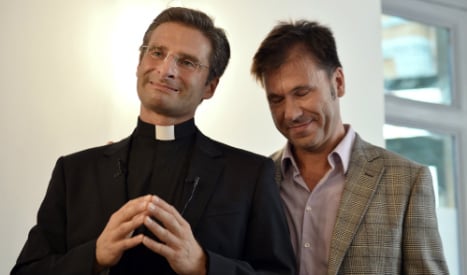