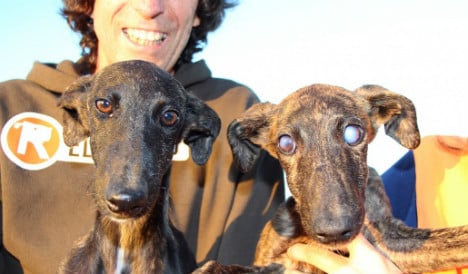 With an estimated 150,000 dogs abandoned in Spain each year, a third of them greyhounds, the nation has become somewhat immune to pleas to adopt them.

But a pair of greyhound puppies have generated nationwide attention with a story that has made headlines across Spain and melted hearts.

The pair of downtrodden pups were discovered by residents at a battered women’s shelter in Navalcarnero near Madrid when it was noticed that one refused to leave the side of the other and appeared to be guiding her through the fields.

It emerged that the male dog, who is darker in colour, was permanently at the side of his lighter-coloured sister as she took tentative steps through scrubland searching for food.

“On approaching the dogs, it was possible to see that one of them had a cloudy veil covering the retina of the eyes,” explained Nacho Paunero, the head of El Refugio, a dog shelter charity in Madrid.

“Her brother seemed to be fully aware of the blindness of his sister and would not be separated from her for a single second, he was protecting and guiding her,” Paunero said.

See a video of their rescue here:

The dogs were given the names Pisper and Blinder and have now been taken in by the charity, which is hoping to rehome them together.

“The dogs have been seen by the vet and the blindness is most likely caused by an infection,” said the charity. “With the right treatment we hope she will make a full recovery.”

Campaigners such as SOS Galgos and Galgos del Sur warn that around 50,000 greyhounds are abandoned in Spain each year and many others are drowned by their owners or hung, once their hunting days are over.