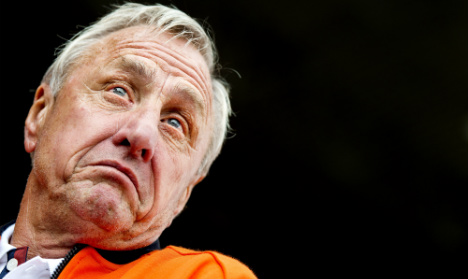 “For me it is a battle, but it is a battle that I am convinced I will win,” former Ajax and Barcelona star Cruyff said during his first public appearance after news of his illness was revealed last month.

Cruyff, who captained the Netherlands to the World Cup final in 1974 and was one of the proponents of the “total football” philosophy, was appearing in Barcelona at the presentation of an agreement between his foundation and a university in the Catalan city.

Looking well and smiling, Cruyff revealed he had already undergone a first bout of chemotherapy.

“I feel good after the first time. I had no problems. My mentality is that chemotherapy is my friend because it is there to kill the cancer,” said Cruyff, who earlier this week quit his role as an advisor for Ajax.

“I am fully confident everything will turn out fine.”

The three-time Ballon d'Or winner played for Barcelona from 1973 to 1978, winning La Liga in his first season at the Camp Nou which featured a superb performance in a legendary 5-0 win away to Real Madrid.

Cruyff added he had been touched by the show of support since his diagnosis.

“With so many people sending me their positive force, my body is twice as strong as it was before,” he said.