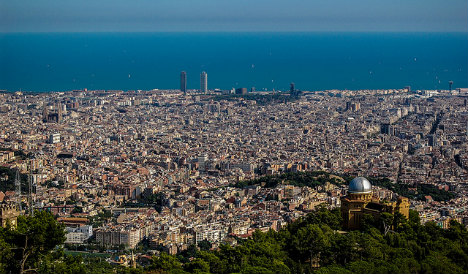 Experts from Catalonia’s Department of Agriculture were on Thursday investigating the cause of a pong that has descended over Barcelona.

The town hall in the town of El Prat de Llobregat, just south of Barcelona, blamed the stench on spilled fertilizer near the Baix Llobregat agricultural park.

“El Prat de Llobregat town hall confirms that the smell in Barcelona and surrounding areas comes from the agricultural park in Baix Llobregat.”

The manager of the agricultural park, Raimon Rueda, admitted that on Wednesday afternoon manure was spread across a four hectare area of farmland on the facility.

But he was skeptical that the manure was the cause of the stink that swept across Barcelona and the wider metropolitan area, saying there was “nothing unusual” in spreading fertilizer and it had been spread on a tiny patch of the 3,500 hectare facility.

Sources at the agricultural ministry told La Vanguardia that it was “difficult to believe” that the whiff had come from normal agricultural activity but that at this time “all hypotheses were open”.

The city’s Civil Protection service confirmed that from 2pm on Wednesday, the emergency services had received around 40 calls reporting the bad smell, from neighbourhoods around the city such as Eixample, Sants and Sant Andreu.

Barcelona residents meanwhile have been complaining about the odour, which they liken to “faeces” or “manure”.

Adam Dawson, a British businessman who lives in the Eixample district of Barcelona, told The Local: “I kept thinking I had stepped in dog shit and kept checking my shoes every so often.”

But, he admitted it wasn't an entirely unpleasant olfactory experience.

“I actually got used to the smell,” Dawson said. “It reminded me of the English countryside.”

Others took to social media using the hashtag #MalOlorBCN (BadSmellBarcelona) to complain about the stench.

“I’m going to Barcelona today. There’s a shitty smell across the city, isn’t there?”