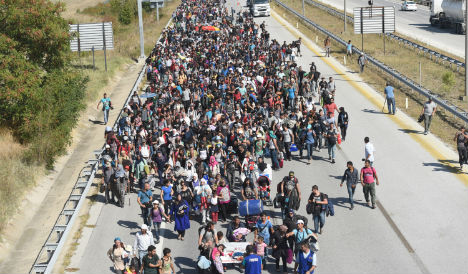 A Spanish town councillor has been forced to resign after posting a vitriolic message calling for ‘refugees to be shot in the head’ on Facebook a day after the Paris terror attacks.

Martín Noriega Campillo , a councillor for the right-wing Popular Party in the northern town of Peñamellera Baja, Asturias, posted the message at 11am on Saturday.

“What bastards,” he wrote. “And we still have to take them in and respect them…a fucking shot to the head and be done with it. They are all the same and sooner or later they turn.”

His rant was accompanied with two angry faced emoticons and two pistols.

The post went public after a councillor of nearby Cabrales, Jose Sanchez Diaz from the socialist (PSOE) party took a screen shot and posted it on twitter.

“It was probably a childish joke but public officials have to be careful what they say on social networks,” he explained to local media Asturias24.es.

“We do not want to see in Peñamellera Baja what happened in Madrid,” he said in reference to a furore caused by anti-semitic tweets sent by a culture official.

“We must remember that refugees seeking to reach Europe are fleeing precisely those who carried out the attacks in Paris,” he added.

The town’s mayor confirmed on Tuesday that Noriega had indeed left his post following outrage over his comments in the wake of the Paris attack.