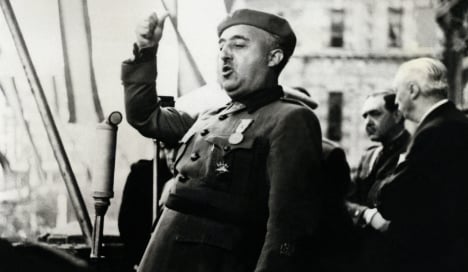 “Franco lied about almost everything,” British historian Paul Preston, the author of what is considered to be the definitive biography of Franco, told AFP by telephone from London.

“One of his biggest lies was that he saved Spain from World War II, whereas he constantly tried to participate” on the side of the fascists, added Preston, professor of Spanish Studies at the London School of Economics.

Franco came to power after his side won Spain's 1936-39 civil war with the help of Germany's Adolf Hitler and Italy's Benito Mussolini. He then ruled Spain with an iron fist until his death on November 20th, 1975.

“Spain was a weakened, defeated country, and more of a problem than a solution for Hitler, who was irritated by what Franco demanded” to enter World War II, said Spanish historian Carlos Gil Andres. Hitler and Franco met at the station in Hendaye in October 1940 Photo: AFP

Although Franco did not bring Spain officially into World War II on the side of Nazi Germany, he allowed volunteers to join the German army to fight against Soviet Communism in a so-called “Blue Division”

“When 47,000 men go fight on the Russian front on the side of the Blue division, we can't say Spain is not at war,” said Julián Casanova, one of Spain's leading historians who edited an anthology on Franco.

He said “at least” 50,000 people were executed by the Franco regime in the decade that followed the civil war and hundreds of thousands of others were taken prisoner as Franco consolidated his grip on power.

Preston portrays Franco in his biography as a “lowbrow” man who was “rather mediocre”, and who displayed “enormous egocentrism” and “a calculated cruelty” fuelled by a ferocious hatred of separatism, communism and Freemasonry which he sought to eliminate from Spain.

But Preston also writes that Franco was “cunning” and equipped with great intuition to adapt to changing circumstances.

The regime and its ally, Spain's Roman Catholic Church, portrayed Franco as a “saviour of Western Christian traditions”, a “master strategist” who “never made a mistake” and the author of an “economic miracle”.

Among the false claims by the regime which are still widely believed by many is that Franco was “a saviour of Jews” during World War II.

“Franco was not like Hitler, he did not want to annihilate the entire Jewish race but he was very anti-Semitic. He adopted a softer approach towards Jews when it started to look like the Axis powers could lose,” said Preston.

The Spanish government published a brochure in 1947 which said Franco offered to let Jews move to Spain, said Preston.

“A pure lie. What he offered at most was to allow them to travel through Spain, but in a very limited way,” he said.

“My entire life is work and reflection,” Franco said in 1946, a statement that contrasted with his love of golf, fishing and hunting trips where government contracts were distributed among supporters.

Spanish historian Angel Viñas dismantles the image of Franco as an “austere and spartan” leader in his book “The Other Face of the Caudillo”.

“While soldiers died in the trenches, suffering hunger and lice, he was becoming a millionaire,” he told AFP.

Vinas said that by August 1940 Franco has amassed a personal fortune totalling 34 million pesetas, the former Spanish currency, or the equivalent of around €388 million ($416 million) today.

“Francoism was one of the most corrupt regimes in Spain's history,” he said.

“But I don't say that Franco was a thief. Since Franco was the source of the law, his decisions were the law, nothing he did could be illegal.” Franco designated King Juan Carlos as his successor, who instead of continuing the dictatorship steered Spain towards democracy after the dictator's death in 1975.

Preston also knocks down one of the last myths about Franco – the idea that he planned and approved of the king's role.

Instead, “it was his successor (the king) who decided not to carry out the tasks Franco had assigned him,” he said.