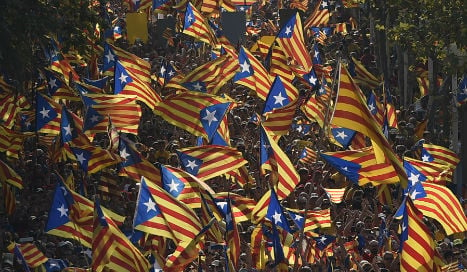 “There have already been some relocations,” Javier Vega Seoane, the president of the Circulo de Empresarios which represents owners and top managers of leading firms in Spain, told the daily newspaper El Mundo in an interview.

“About a thousand companies left Catalonia in 2014 when the situation was more hypothetical and today the situation is more complicated,” he added.

“No businessman likes to be in a territory where the law is violated.”

Separatist Catalan lawmakers approved a text last week which calls on the regional assembly to start working on legislation within 30 days to create a separate social security system and treasury, with a view to completing independence in 18 months.

Spain's central government immediately challenged the motion in the Constitutional Court, which suspended it while it decides on its legality.

“We don't think the secession process will succeed, but if it did, the damage would be significant,” added Seoane whose organisation represents major firms such as Spanish banks BBVA and Santander, US tech firm Google and French transport giant Alstom.

His warnings echo those made by large firms in Britain ahead of Scotland's independence referendum in 2014, which ended in a “no” vote.

Ratings agency Fitch on Thursday cut Catalonia's rating by two notches, taking it down to BB – into speculative or “junk” territory – due to the growing tensions between the region and Spain's central government.

Credit ratings affect borrowing rates, thus Catalonia's threat to break from Spain is taking its toll on some of Barcelona's biggest companies by driving up their financing costs.

Catalan separatist parties won a majority of seats in the regional parliament for the first time in local elections on September 27th.

Catalonia, a region of 7.5 million people with its own language, accounts for a fifth of Spain's economic output, and already enjoys a large degree of autonomy in education, health and policing.