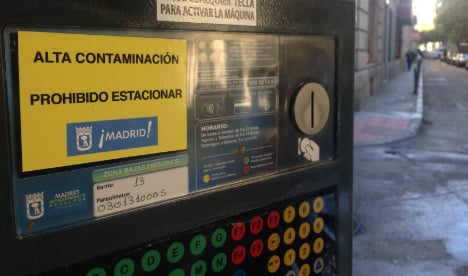 Many of Madrid’s major roads were eerily quiet on Friday morning as the City Hall announced emergency measures in response to dangerous levels of air pollution, banning vehicles from parking in the city centre.

All non-residents are prohibited from parking in the centre of Madrid; parking metres were deactivated at 6am on Friday morning, while signs were stuck onto the ticket machines informing drivers “high pollution, parking prohibited”.

On Thursday, the city launched 'scenario one', which saw the speed limit slashed on roads leading into the capital from 120km/hour to 70km/hour (44mph).

The emergency measures were put in place after Madrid recorded dangerous levels of nitrogen dioxide on Wednesday; 11 out of 24 monitoring stations recorded levels exceeding the limit of 200 micrograms.

Vehicles that are exempt from the new parking rules include commercial vehicles, taxis and school transport.

Madrid mayor, Manuela Carmena, told Spanish radio station Cadena Ser on Friday morning that she was being kept up to date on pollution levels by the working group in charge of monitoring contamination in the city.

“At the moment there is no cause for alarm, the signs are encouraging,” she said.

Madrid's 3,954 parking metres are all out of service on Friday, with commuters encouraged to take public transport.

Madrd’s EMT bus service has provided extra transport along 55 of its routes, especially those linking the outskirts of the city with the centre, while the city's cercanías train line will also provide extra services throughout the day.

City Hall tweeted a summary of the new measures, including reminding residents that the speed limit had been reduced to 70km/hour, parking was prohibited in the city centre and also encouraging people to use public transport and not to embark on outdoor exercise if they suffered from breathing problems.

The protocol was established in March 2015 by the previous mayor of Madrid, Ana Botella, but this is the first time it has been put into action.