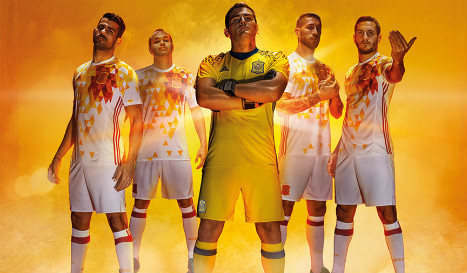 Spain’s official strip for Euro 2016 went down well at its grand unveiling this week; a vintage twist on the classic red and yellow design of La Roja.

But sadly the same cannot be said for the team's away kit, which has been ridiculed on social media since it was unveiled in Paris this week.

The white strip, splattered with yellow triangles is designed by Adidas, but even the clout of one of the world's biggest sports brands has not saved the shirt from being torn to shreds by social media users.

Well #gawa won't have the WORST kit at Euro 2016. Someone's vomited paella over the Spain away shirt. pic.twitter.com/N6QMVHI6Q6

New Spain away kit is sick, and I dont mean that in a modern youth slang way, I mean it looks like someone vomited paella on a white shirt!

The new Spain away shirt looks like someone has been clumsily eating spaghetti and spilled it all over themselves. pic.twitter.com/oLxdxsmoIQ

Adidas designers: so we need a new away kit for Spain *accidentally dumps bag of doritos on white shirt* Good enough pic.twitter.com/BukA8vDwxP

While the general consensus was that the shirt resembled some kind of regurgitated foodstuff, some people were brave enough to declare that they actually quite liked the unusual design.

Why are people so scared of kits that have a little personality? Good job, Spain away shirt.

The England team will take on Spain in Alicante on Friday night in a pre-Euro 2016 friendly.