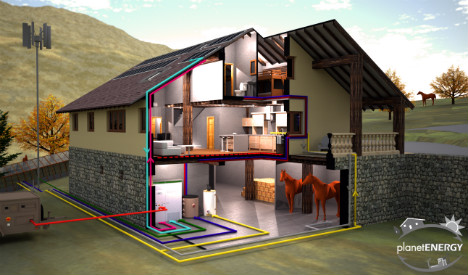 California-born Meghan Sapp, founder of PlanetEnergy has created an “energy island” in the form of a Navarra farmhouse to prove that it is both feasible and profitable to be completely self-sufficient, even on a small scale.

The farmhouse near Oskotz, 25 km north of the regional capital Navarra, is designed so that all household waste, including human poo, is converted into biogas to provide energy in order to heat the house, provide hot water and power the stove.

“The system relies on having four horses. Horses eat a lot of grass, then they poop a lot and that’s great for making biogas,” Sapp, who moved to Spain from Brussels where she worked for an alternative energy agency, told The Local.

“But all household waste goes back into it, whether it be vegetable peelings, all the water from the shower, toilets, washing machine etc,” she explained. The system will also take advantage of the biogas to produce mineralized water and fertilizer with which to irrigate the three hectares of land where produce is grown to be consumed by the household.

The house also has photovoltaic panels on the roof and a mini wind-turbine that provides enough electricty to run the house.

“The idea of building this house is to demonstrate that it is technically viable and economically feasible to be an energy island, no matter how small the scale,” she said.

“But also to show that is possible to do all this without sacrificing any of the luxuries of modern life.”

The house has underfloor heating, a dishwasher, is very well insulated and uses only sustainably produced materials but follows the traditional farmhouse design of the region, with the animals kept downstairs and the family living above.

Sapp spent some time looking around for the perfect property on which to build her pioneering prototype.

“It took some years to find the ideal spot,” said Sapp, who chose Navarra partly because of its proximity to her husband’s family in the Basque Country.

“We needed enough land for our four horses and it needed to be a place that had sun and a community that was welcoming, and all of that within our budget,” she said. The house in the Valle de Imotz in Navarra. Photo: PlanetEnergy

The entire project, including purchasing the land and removing the existing property that had lain abandoned for at least 50 years, came in at around €500,000 ($536,000) and will be finished and up and running by next Easter.

“The investment in the energy system amounted to around 20 percent of the outlay,” she admits. “But we are looking at a pay back within four and a half years”.

Sapp hopes to win more commissions for such projects with her startup company PlanetEnergy, which she founded in 2011 and which her husband, Iñigo Arana, joined in 2013.

“There are lots of large-scale biogas treatment plants but on a smaller scale like ours, we are pioneers,” said Sapp.

“It would be a perfect system for example to have at a riding stable where so much manure is produced that you actually have to pay to put it in a landfill. So there is lots of scope for taking waste and turning it into an asset.

“But we could also design a system for a village or indeed, like ours, an individual house.”