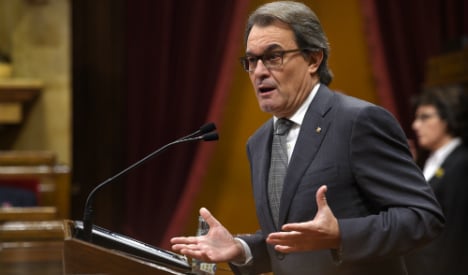 The leader of the Junts Pel Si – “Together for Yes” alliance – lost a vote of confidence by 73-62 in the Catalan parliament after failing to win round the pro-secessionist, far-left CUP.

Mas, who has steered Catalonia on a drive to breakaway from Spain, needs to secure support from CUP’s 10 parliamentarians to form a majoriy government after his alliance won 62 seats in the 135-seat parliament in the September election.

But despite sharing an ambition for the wealthy region to breakaway from Spain, CUP has consistently refused to back Mas calling instead for an independent candidate untainted by corruption and austerity cuts to lead Catalonia towards independence.

The 59-year-old attempted to persuade CUP to lend their support by offering an interim deal to serve just ten months before submitting to a confidence vote.

Yet the result on Thursday was a repeat of the vote two days earlier and could pose a setback for the northeastern region’s  drive towards independence.

The parliament now has until January 10th to reach a consensus to form a government and elect a leader or it must call fresh elections.

Catalan lawmakers passed a  resolution on Monday to push ahead with the secession process, but on Wednesday Spain’s constitutional court accepted a lawsuit filed by the conservative central government against the resolution.

Acceptance of the lawsuit means the motion is immediately suspended while the court considers legal arguments, although Catalonia immediately vowed to push ahead  despite the court's ruling.